Which Star Trek Is the Best Star Trek? Let’s Settle This Once and for All 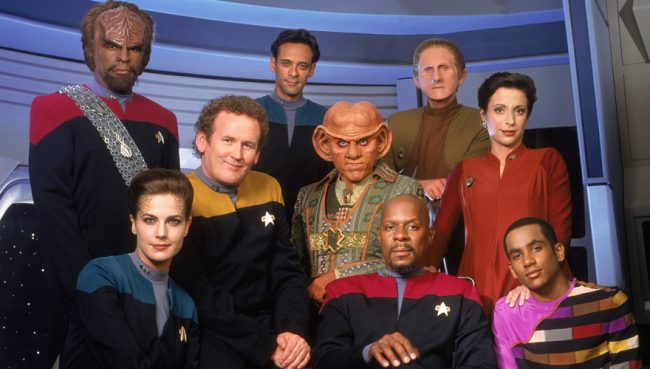 Writing about how much I dislike Willian Shatner’s current approach to being also got me thinking about how much I freaking love Star Trek, and how so many of my Shatner emotions stem from the deep disappointment that he’s betraying its legacy. And it made me want to talk more about the good things about Star Trek, namely, which series is best overall, and the answer to that would be Deep Space Nine.

Listen, before you angrily @me, hear me out. I can already see all of you Next Generation folks yelling at me through the computer screen, but here’s the thing: when was the last time you rewatched The Next Generation? Because I’ve recently rewatched all of the series (save Enterprise—I don’t hate myself that much), and I hate to break it to you, but TNG does not hold up as well as you remember it holding. The first few seasons are absolutely sophomoric, and while some later episodes are epic, there are way, way more duds than you recall.

I get it, Patrick Stewart is great, I love him too. But Patrick Stewart can’t make up for the female characters essentially getting nothing to do for years, for episodes with the early Ferengis, or for Wesley “Boy Wonder” Crusher.

Voyager has its moments—a lot of them. But the characters don’t get to enjoy the warm richness of DS9’s characterizations, and the plot to get home grows thin as worn-out uniform, much-darned because you should conserve the replicators and they don’t have Elim Garak. When you do a Voyager rewatch, Jeri Ryan is great as Seven of Nine when she’s allowed to breathe (her skin-tight costume was so constricting it made her pass out), but with her addition, the show suddenly becomes The Seven of Nine Nazel-Gazing Hour, and Also the Holographic Doctor is Here Too. Everyone on Voyager deserved better, especially Kathryn Janeway. The original series still holds the silver medal in my heart because it went where no other show had, and was radically, profoundly ahead of its time. I’m also a fan of fist fights on cheesily decorated planet landscapes.

Now before you set phasers to kill, let’s return to the best Star Trek, Deep Space Nine. Deep Space Nine is a complex adult space drama with deep, long-running themes, utterly fantastic, diverse and distinct characters, quadrant-spanning wars, shapeshifters, religion, rebellion, romance, Kira Nerys in the Mirror Universe, and Garak. Even Ds9’s secondary characters were so intriguing that they would go on to become recurring figures with lives of their own. Hell, an alien, Morn, who sat silently in the background at Quark’s bar for years was such a good character he got an entire episode about him. Can you say that for any other science fiction show, let alone another Star Trek?

DS9 has the best Captain, Sisko, who has none of Picard’s aloof detachment and just enough of Kirk’s untamed passion. He has Janeway’s willingness to self-sacrifice and strategic brain. He is involved with a beautiful member of the very rebels he is tasked with thwarting. He lets his son become a writer. Sisko doesn’t spend all day whining about the Prime Directive. He gets it done and no, he does not want to be your goddamned messianic Emissary but he’ll do what’s necessary. That’s Benjamin Sisko to the core. He doesn’t mess around, but even after you’ve disappointed him he’ll take you out for a game of baseball. Sisko is the best dad and the best Captain.

It’s the characters that truly elevate DS9 above the rest of the Trek pack. I can name every single one immediately, name their likes and dislikes, their best friends, their lovers, their quirks. Quark is probably my favorite character ever created and acted on a Star Trek show. To watch Quark playing off of Odo is to witness two veteran actors having more fun than we ever will and is the stuff of comedic genius. Fight me. The main women—Kira and Dax—are in charge, uncompromising, brilliant, complicated, and tell their own stories. I will weep every single time Jadzia Dax dies and you cannot stop me.

The villains are so vibrant and delicious that they can switch sides for a while and you believe them, and then they betray you and you’re like, “Well, I don’t know what I was expecting.” Can you really tell me Q or any baddie from Voyager who I can’t even remember was better at messing stuff up than freakin’ Gul Dukat? More insidiously ingratiating than Kai Winn? You’re gonna try and take it to Louise Fletcher? I don’t think so.

Sure, the Borg had their moment on TNG and it was a big moment, but would you really want to watch multiple seasons of their shenanigans? (Voyager, I’m staring directly at you with my laser eye.)

From the first episode, DS9 submerges you into a world of mythology, the aftermath of cruel war, the love and loss of family, and the enduring rites of friendship. It is wholly and gloriously human, with all of our flaws and triumphs on its sleeve. It shows people as petty and petulant and bigoted and generous and kind and clever and complex. It’s a million light-years away and also about the coworkers at your office and your parents and the freedom fighters across the sea. It’s devoted to telling profound parables of our own messy world, only painted across a quadrant-spanning space canvas.

Like any Star Trek, it isn’t perfect: Terry Farrell’s Jadzia was robbed, the Dominion can go away and no one would care, and maybe Doctor Bashir needs to lay off the holodeck. But DS9’s heart is raw and real and beating, and the show makes you smile and cry and feel. That is why, ultimately, it is the best Star Trek.