Scientists find signs of complex life in an Antarctic lake buried under two miles of ice. There may even be fish! 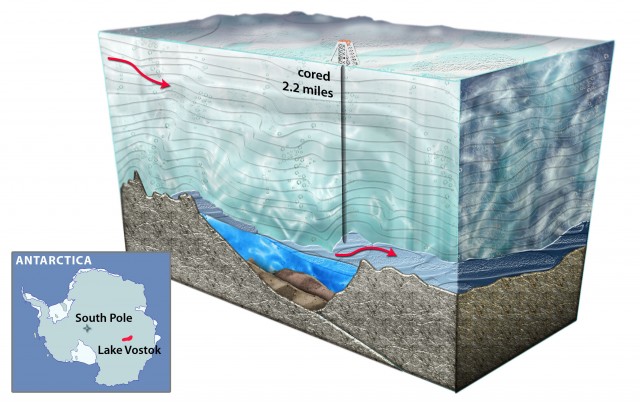 Lake Vostok, a body of water located about two miles beneath Antarctica‘s icy surface, may be home to a viable ecosystem in spite of intense cold, complete darkness, lack of nutrients, and possible volcanic activity. And what’s more, new evidence uncovered from samples of organic material suggest that the lake’s inhabitants could include complex life forms such as arthropods, mollusks, and even fish. A group of researchers at Bowling Green State University (BGSU) concluded in a new study published in the journal PLOS ONE that “although Lake Vostok is oligotrophic,” or nutrient poor, “based on the metagenomic and metatranscriptomic results presented here, it is far from sterile.”

Lake Vostok is considered one of the most isolated places on Earth, located more than two miles beneath the surface, cut off from the rest of the world for 15 million years, and is often compared to the ice moons of Jupiter and Saturn. A false start in investigating the lake took place earlier this year, when scientists announced that they had found an entirely new form of life in Lake Vostok, but later concluded that their samples had been contaminated. This time, though, researchers didn’t go looking for exotic new life, and instead focused on identifiable genetic material taken from core samples recovered while drilling down into the glacial ice. 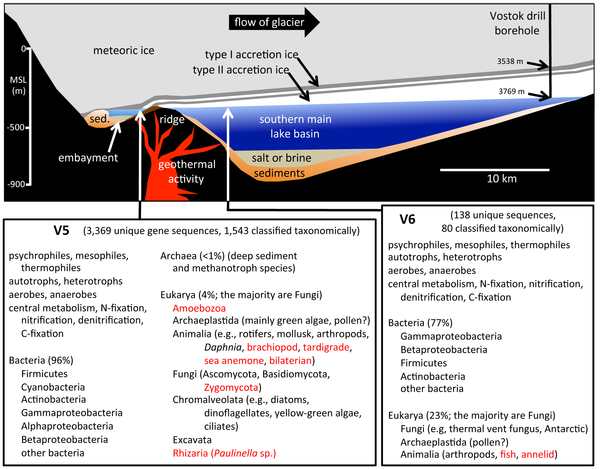 That latest search has proven much more fruitful. Of the 3,507 unique gene sequences found, 1,623 were identifiable by genus or even species. 94% of the identified RNA sequences were from bacteria, while the rest were from more complex eukaryotic organisms. Many of these were identified as fungi, but a few of them most closely matched animals: Some corresponding to insect-like springtails, crustaceans sometimes called water fleas, or tiny clam-like bivalves.

While this is all exciting news that could potentially rewrite the book on where life can thrive, the sequences that have the research team most excited were ones that were very similar to bacteria found in the digestive systems of fish, including E. coli and salmonella. While it’s possible that relatives to those bacteria could live independently, the study concludes that it’s unlikely, reading in part “All of these species depend on intimate associations (symbiotic or parasitic) with their eukaryotic hosts, which are crustaceans, annelids, fish, and other animals.”

While the results seem almost too good to be true, BGSU scientists think it’s unlikely that this discovery is the result of contamination, explaining “it is difficult to imagine how the majority of the sequences determined in this study were the result of contamination, given the number, diversity and physiological variety of the organisms.” Given the lake’s limited exposure to the outside world, they instead conclude that Lake Vostok has a viable ecosystem of its own that has survived for millions of years. So let’s get down there and get a better look at it already, why don’t we?