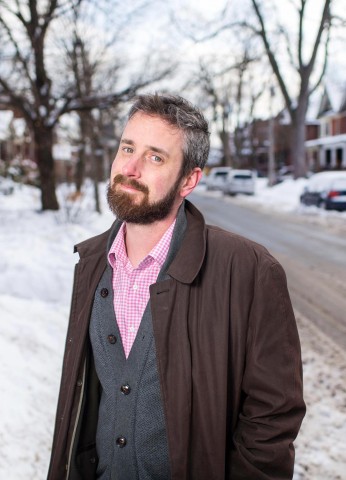 We love comics creator, Chip Zdarsky, ’round these parts. From his stellar work doing the art (and providing hilarious advice in the letters column) on his creator-owned comic Sex Criminals with writer Matt Fraction, to writing an awesome new take on Marvel classic character, Howard the Duck with artist Joe Quinones, Zdarsky has proven himself to be a compelling and unique comic talent. However, there’s another work of Zdarsky’s that deserves your attention if you haven’t already been reading it in single-issues.

Kaptara is another of Zdarsky’s creator-owned titles with Image Comics, this time with artist, Kagan McLeod. It tells the story of a space mission during which all hell breaks loose. What really makes the title special, though, is that this smart, hilarious story is populated with nuanced, diverse characters led by a gay Indian scientist named Keith who deflects horrible situations with snarky humor.

Oh, and there’s a Motivational Orb.

I had the chance to get Zdarsky on the phone to talk about Kaptara, which will be available in trade TOMORROW (last-minute Christmas shoppers ahoy!). In our interview, which you can listen to below, we discuss his diverse cast of characters, the importance of little piles of shit wearing hats, and the fact that he has zero relationship with the fantasy genre – which is, of course, exactly what makes him the perfect person to write a fantasy comic. You’ll also see some of McLeod’s lovely artwork on screen.

Check out Chip Zdarsky and me chatting about Kaptara: