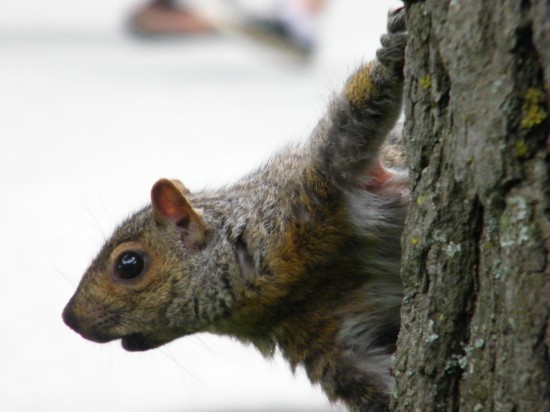 The sleepy hamlet of Bennington, Vermont is in the grip of terror thanks to an angry little gray squirrel believed to be behind several attacks on area residents. Three people have come forward saying they’ve been bitten and scratched by the diminutive, angry rodent — some of them reporting that the attacks were indiscriminate and unprovoked.

With so horrible a beast on the loose, Bennington residents have gone to great lengths in order to defend themselves. The Christian Science Mointor reports that some residents were seen “battling the squirrel with a metal pole and a blanket.” Truly, an epic sight to behold.

Of course, the situation becomes less funny with the news that one of the victims is being treated for rabies. Hopefully the situation is not so grave. Robert Johnson, a Vermont Public Health Veterinarian, is quoted as saying that there have been no known cases of a human contracting rabies from a squirrel. He proposes a different reason for the squirrel’s behavior:

“They’ve lost their fear of people and they go ballistic (when they encounter a person) because it’s not their human,” Johnson told the AP.

So if you’re traveling through Vermont keep your wits about you. And maybe carry a metal pole and a blanket, just in case.

(via The Christian Science Monitor, image via Wikipedia)