This Veterans Day, Remember All The Sexually Assaulted Vets Who Deserve Better from Our Military | The Mary Sue

This Veterans Day, Remember All The Sexually Assaulted Vets Who Deserve Better from Our Military 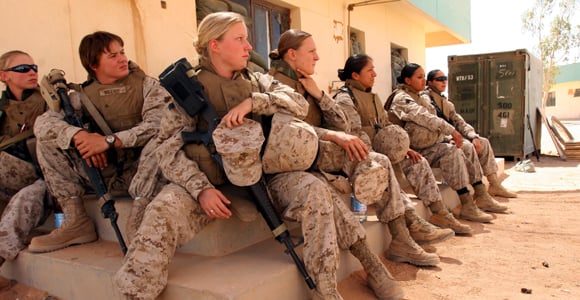 This Veterans Day, as many in the U.S. remember their relatives and friends in the armed forces, it’s also crucial that we remember the sexual assault survivors in the military – and that we condemn just how poorly our government treats them.

The Iraq and Afghanistan Veterans of America (IAVA) recently released the 2017 edition of their annual membership survey, and the statistics on sexual assault are as disturbing as ever. 35% of their female respondents, and 1% of their male respondents, were sexually assaulted while serving. (As always, non-binary readers, I’m sorry these surveys constantly leave you out. I see you.) 60% of the women and 70% of the men assaulted did not report their assailant – and it’s easy to understand why. Of those who did report, 71% of the women and 64% of the men experienced retaliation for doing so. The 2016 Department of Defense Annual Report on Sexual Assault in the Military revealed a similar crisis in reportage and retaliation, with only 9% of reported assaulters even being convicted.

In their separate survey of 1,300 service women, the Service Women’s Action Network (SWAN) found that 61% of respondents had been diagnosed with depression, and 51% had been diagnosed with post-traumatic stress disorder (PTSD). Asked what about military service had most negatively impacted their mental health, “30% of the women surveyed identified Military Sexual Trauma, while only 9% said deployments or combat.”

(The IAVA survey also has truly horrific statistics on the prevalence of mental health issues and suicidal ideation among veterans – only 16% of whom believe troops and veterans are getting the care they need for mental health injuries. I’d advise you to peruse the whole survey for a glimpse of how poorly we treat people who are traumatized by war.)

Indeed, the military’s sexual assault negligence doesn’t end after victims leave the service. As the ACLU detailed in their report, “Battle for Benefits : VA Discrimination Against Survivors of Military Sexual Trauma”, the U.S. Department of Veterans’ Affairs is much less likely to grant a veteran’s PTSD disability claim if that claim is based on sexual trauma sustained while working in the military. The report uses data from 2008-2012 to demonstrate that the VA “has granted disability claims for Post-Traumatic Stress Disorder (PTSD) caused by in-service sexual trauma at significantly lower rates than it has granted claims for PTSD arising from other causes … The grant rate for [these] claims has lagged behind the grant rate for other PTSD claims by between 16.5 and 29.6 percentage points every year.”

All of these numbers point to a culture of active-duty complicity and post-service negligence that has a terrible human cost. And it’s a cost that is amplified every time the federal budget increases funding for weapons and fighter jets while decreasing funding for disability benefits and Veteran’s Affairs services. The U.S. military needs to do far, far better by survivors of sexual assault while they’re still serving, and the federal government needs to do far, far better by survivors with PTSD once they’re out.

Inevitably, of course, some “patriots” try to conflate respect for human veterans with respect for the U.S. military. However, the U.S. military is the employer of those who serve in the armed forces. The idea that asking an employer to do better by its employees is somehow “disrespectful” to those employees would be laughable in any other career – and it’s equally laughable here.

If you know someone in the military – whether active-duty, veteran, or a civilian employee of the armed forces – who has been assaulted, I’d recommend they reach out to Protect Our Defenders. This organization offers free legal assistance for military sexual assault survivors. If you’d like to do something active for military sexual assault survivors today, you can also call your representatives to voice your support the Military Justice Improvement Act, a bill which is meant to standardize and reform the military’s sexual assault reporting process to minimize the possibility for retaliation.

Veterans are not particularly entitled to freedom from sexual assault as a result of their service. Every human being should live free from sexual assault, regardless of their job. But since service members are employees of the U.S. government, those of us who are represented by that government are particularly responsible for advocating for them.