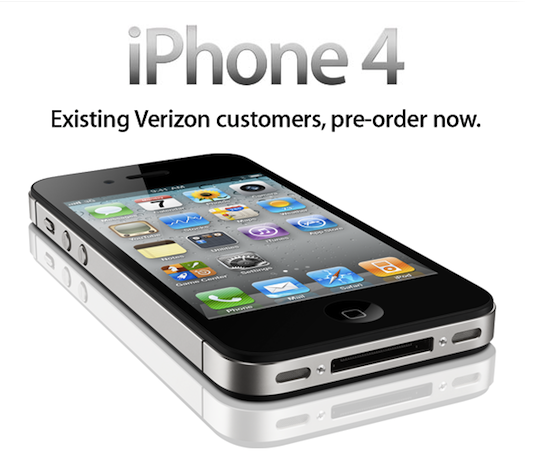 Verizon Wireless customers who have endured who-knows-how-many Verizon iPhone rumors over the years have finally been rewarded for their faith: Since 3AM EST, Apple’s website and Verizon’s have both been offering 16GB and 32GB iPhone 4s for preorder, to be shipped or available for pickup in an Apple Store by February 10th. Non-Verizon customers will have to wait until February 9th to order online or in an Apple Store, and iPhone 4s will hit Apple Store shelves for all at 7AM local time.

While the phone is slightly different from AT&T’s iPhone 4, most notably in its CDMA chipset and modified antenna placement, the general consensus among critics is that this is basically the same phone, but on a better network.  Josh Topolsky: “This is very much the iPhone 4 that people have come to know and love. It’s not the next generation Apple device, it’s not a wowee-zowee LTE experiment, and it isn’t a revolution in mobile computing. What it is, however, is a big chance to give a large portion of America’s smartphone users a crack at a phone they’ve likely been lusting after for some time.”

It remains to be seen how well that network holds up when lots of people get their hands on iPhone 4s, although considering that plenty of people have been playing around with Droids and other Android smartphones on Verizon for well over a year, the decline might not be as drastic as some presume. More controversially, Verizon has said it will throttle data speeds of its top 5% of users to “provide the best experience to our more than 94 million customers.” But then, we’re talking unlimited data on an iPhone and an iPhone on Verizon, and while AT&T could still be the best carrier for some current customers, this new availability will no doubt make many people pretty happy.