We knew there was radiation out there, but we didn't realize it was basically a nitrous booster for subatomic particles 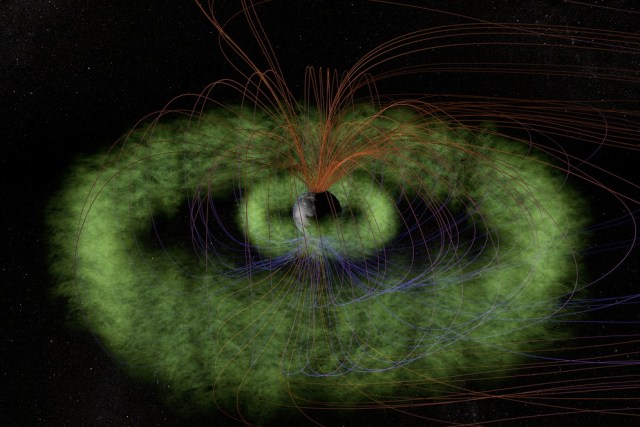 We’ve got good news for anyone who’s ever dreamed of taking a trip to CERN to see how a giant particle accelerator operates — you can save yourself a plane ticket. As it turns out, the Earth itself is surrounded by a  radiation belt that contains regions of energy that act like particle accelerators

The speed boost that particles get by traveling are getting kicked around by localized jolts of energy within the Van Allen belt itself, adding energy to the travel of the particles, much the way a region of warm water adds energy to a hurricane traveling overhead. That settles once and for all the question of whether the added energy is attributable to the Van Allen belts themselves, or a process occurring within them. Now that it’s understood to be a localized process, though, a whole new host of questions about what forces govern these jolts of energy.

That’s one of the findings from the first round of data scientists at NASA harvested from a pair of probes sent to study the activity of the Van Allen belts, which have messed with the minds of planetary scientists for years. Unfortunately, while the new data demonstrates some interesting things about how the belts behave and how they charge particles moving through them, it doesn’t make that behavior much less mysterious. Researchers noted, for example, a massive increase in the presence of high energy electrons back in October, stemming from the middle of the radiation belt and moving out in all directions. What they haven’t been able to discern yet is what caused that energy ripple to form and what effects it might have that we’re not seeing yet.

Researchers are hoping further data from the probes will reveal more about the seemingly irregular energy patterns of the Van Allen belt. Better understanding those forces could improve our idea of how the universe works in general. More pragmatically, it could lead to the development of spacecraft that can take a licking from cosmic rays and keep on ticking, shielded from dangerous barrages of highly charged particles.

Update: An earlier version of this article mistakenly stated that researchers were surprised by the speed at which the particles were traveling, when in fact the surprise is the high energy regions jacking that speed up. We regret the boneheaded error.