In the Battle Between Vampires Vs. Zombies, Vampires Have Made Way More Money 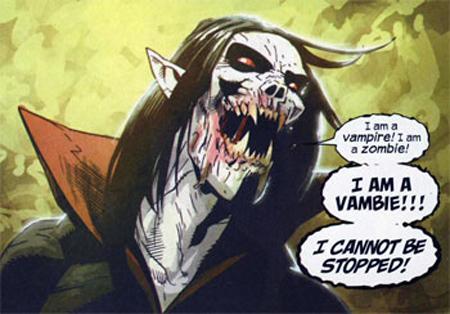 People love their supernatural monsters, and as we know, zombies are having a moment right now and have been for a couple of years. Some might even say that the vampire craze (given a Beatles-like tween boost by the success of the Twilight franchise) has fallen by the wayside just a little bit. But if you only knew how much bank vampires have been making in the past 20 years alone compared to zombies, you’d be the slightest bit blown away. Yes, zombies have pumped $5 billion into the economy over the past few decades, but vampires have made $10 billion — on movies alone. In just the past two decades. I guess it’s time to prepare for Occupy Transylvania, everyone!

Hahaha, just kidding. The remaining functions of the zombie brain don’t allow them to be offended by the financial disparity.

For some context as to why this new report by Daily Finance only covers the last 20 years of vampires in movies and novels, consider the following:

Bram Stoker wrote Dracula in 1897, and it went on to become a best-seller. Even before that, John Polidori wrote The Vampyre in 1819. This doesn’t even include the movies that were made starting in 1909, 13 years before Nosferatu was made. (You might also count George Méliès’ Le Manoir du diable, a two-minute short made in 1896.) Then figure in the movies with Bela Lugosi and Christopher Lee, and next thing you know, around 200 films about vampires have been made since Dracula took his first lusty bite. The Twilight franchise alone has brought in $1.8 billion.

And remember — this is just in the past 20 years. So, yes: vampires are much more lucrative than zombies, if we’re going to make this a popularity contest. Why could this be? Hmm, let’s think for a second: sex. The answer is sex. Tell me who is desiring sex with zombies (besides other zombies and necrophiliacs) and I will tell you the solution to zombies making as much money as vampires. Vampires are also more eloquent speakers, while zombies are hard to understand since the part of their brain that controls speech has been ravaged by the zombie virus. But it’s probably mostly about sex.