Sharing is caring after all. 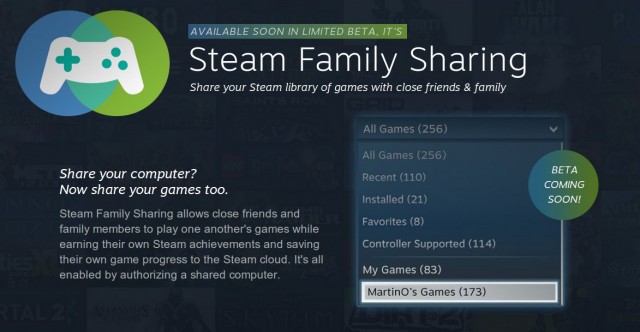 There’s a tradeoff that comes with downloading a game through a service like Steam. You get convenience, but lose the ability to bring the physical disc or cartridge to your friend’s house to play. That’s no longer an issue on Steam. Today Valve announced the Steam Family Sharing program, and we’re super pumped about it.

The program is in beta right now, and you can try to sign up by joining the Family Sharing Group on the Steam Community page. How it works is players will be able to authorize up to 10 other computers to play games in their library.

Instead of sharing individual games you share your entire library, but not every game is eligible to be shared. They cite “technical limitations” but we’re also willing to be some game companies aren’t thrilled with this situation.

Another limitation is that a shared library can only be accessed by one player at a time. Think of it as the game being a physical thing again. Two NES system couldn’t play one Dr. Mario cartridge at the same time, so two computers can’t play the same games at the same time either.

If you have any other questions about the finer details and restrictions to this deal there’s a great FAQ over on Steam’s site announcing the program.

(Steam via The Mary Sue, image via Steam)