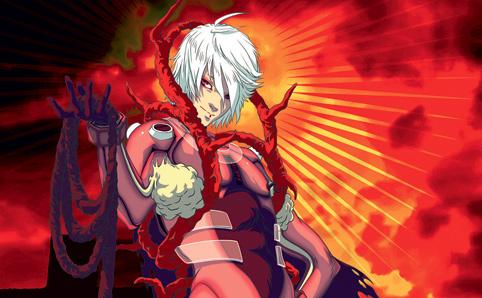 What do deep throat laser cannons, sanitary pad skateboards, and flying scorpion pelvises have in common? They’re all part of the most ovarian-blowing introduction to a superhero ever, the video for Uterus Man. NSFW, sadly, unless you work with someone who can explain this to you (like a gynecologist from space.)

Well, I think that video speaks for itself, and it’s saying “I’m confusing”.

What I do know is I feel inexplicably empowered, although I can’t think of a real-world application for this new strength. I definitely don’t want children any more than I did before I was introduced to the concept of a “meteor baby,” but the incredible power and apparent nesting doll abilities of Uterus Man make me feel like my fallopian tubes are running with the cosmic energy of the Period Gods. Also, it’s worth noting for whatever gender dialogue you want to have about Uterus Man that a superhero who identifies as male gave birth in the video and then USES THE UMBILICAL CORD AS A LASSO TO HURL THE BABY INTO SPACE. Would Uterus Woman do that? Or, hold on–did she?

Other takeaways from the weirdest music video Daft Punk has ever made (jk, but listening to Get Lucky will now forever give me pelvis-racing flashbacks)–I want a sanitary pad skateboard, and if Uterus Man ever gets a sidekick, I’m predicting that it’ll be a Flying Foreskin ( a tampon dog is my first impulse, but that’s too on the nose).

Also, I now know that all the well-intentioned sex ed Canada could give me didn’t crack my own ignorance about the female reproductive system. It’s still just a mysterious labyrinth down there, so I have no clue how much of the above footage is accurate. I hope most of it.

Uterus Man is the meteor baby brain child of controversial “bio artist” Lu Yang. In a 2013 interview with Time Out New York, the 28 year old artist explained (sort of) some of the questions her video is bound to raise:

The shape of the uterus is similar to that of a person standing with their legs close together and arms open. In the design of Uterus Man, the body armour and other elements correspond to parts of the uterus. He is a superhero with special powers and appears to be a man, but the source of these powers is par t of the uniquely female reproductive system. This contradiction makes Uterus Man asexual.

Uterus Man has already been made into an online game, but Lu welcomes other contributors who are interested in developing the Uterus Man franchise. If someone picked up the movie rights, at least we would finally be closer to having a female lead in a superhero movie. I mean only kind of, but I’ll take it.

(via Gizmodo image via Uterus Man)