Just in time for a bloody Valentine. 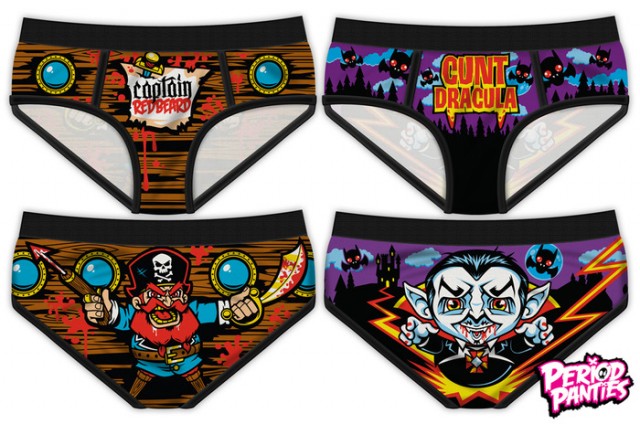 Today in “Kickstarter Campaigns That Have Created More Of A Gender Dialogue Than They Bargained For,” meet Anthony Hall and his Period Panties: “Fun underwear that high-fives you for being a woman and serves as a warning to others!”

Listen, periods are a difficult subject. I get it. Blood has been spilled during my time of the month, and not just from my gushing vagina–sympathetic male partners and friends have felt my wrath when “trying to empathize” turns into “trying not to be a misogynist ass.” Still, it’s difficult for me to feel too sorry for Anthony Hall (as Jezebel points out, no relation to Anthony Michael Hall the actor, which spares my vagina a lot of confusion.)

Hall is currently running a Kickstarter campaign for the menses-specific line and hopes to raise $10,000 by March 9th to continue his production of underwear to prevent “that time of the month” from also being “the low point of the month.” (His store is currently all sold out–in spite of my reservations, clearly there’s a market for his punny panties.)

Is it just me or does this guy sound like Charlie Day after Gender Studies 101?

Personally, I think Hall’s product is well-intentioned. But goddammit, doesn’t it seem risible to anyone else that his product slogan–and in fact the entire line of underwear–implies that embracing a natural process of the female body also means you have a responsibility to warn other people of how scary your vagina is?

Yes, his punny, Hot Topic-esque designs are clever. You can clothe your loins in Rainbo: First Blood, Bleeder of The Pack, Cunt Dracula, or the one I laughed at the most, Shark Week. 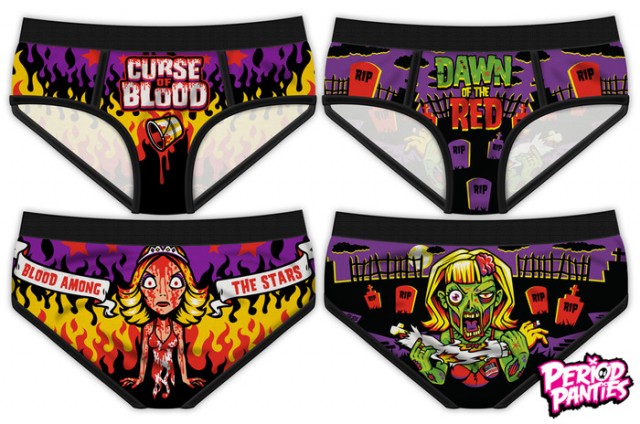 But once I stopped giggling/gagging, I realized I have definite reservations about wearing “Cunt” underwear designed by a dude who focuses his kickstarter video on how to tell if his girlfriend is dtf. I also worry that by wearing one of the comfy-looking pairs I would be supporting the message that vaginas are gross, scary, and a lot like that scene from the end of Carrie. 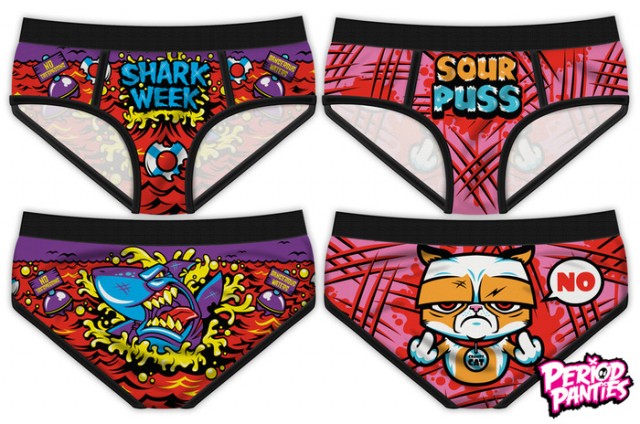 Among the underwear that gave me the most misgivings was Sour Puss–because for one, it is always a bad idea for men to bring up how vaginas smell (duh Hall, that is a body politics minefield.)

Also, the Puss in question is flipping off someone presumably trying to get a intimate with the wearer, which again ties in to Hall’s whole inspiration for the panties, i.e. sometimes his girlfriend didn’t want to have sex with him and wouldn’t explain why. So, naturally he designed underwear that could do the explaining for her, because the only possibility for a vagina not wanting to have sex with Anthony is that said vagina has been transformed into an embarrassing graveyard freak-show.

To Hall’s credit, he appears to listen to feedback from female donors. 4,199 contributors have already helped him raise $166,891 of his goal with 23 days left to go, and judging from the comments on his Kickstarter, a lot of his supporters are women.

Female fans requested larger sizes and that the entire back panel of the underwear be black (c’mon, Hall, this is Period 101 here), and the undie entrepreneur obliged.

However, no matter how funny or lighthearted the spirit of Hall’s panties are, I think there’s something fundamentally gross about his campaign that shouldn’t be ignored. (And not gross like, ick, I just passed a blood clot the size of a baby’s fist. Although, yes, if you’re asking, I’m not a huge fan of that either.)

It seems to me that Hall’s female-positive message is a little skewed. Personally, I am afraid and disgusted by my body at times and perhaps reluctant to acknowledge what’s going on with it. But the solution to any negative feelings I have about my ladybits isn’t to embrace the idea that yes, my vagina is literally just a monster, periods are very scary, and when I am bleeding, it’s my responsibility to warn others away from me and explain to men why the shop isn’t open, sex-wise.

I also don’t think humor as a means of dispelling any awkwardness over the physical pain I’m in or my lack of desire to have sex will solve anything–I shouldn’t be held accountable for how my period makes other people (like Hall) feel.

Also, pro-tip for Hall: the next time you want to tread the murky water of periods, maybe have a woman do your Kickstarter video for you. Perhaps that girlfriend you mentioned. Maybe this is a flawed way of thinking, but personally I’d rather have a woman tell me to what to do with my body than a well-meaning but wrong man like you.

The bottom line is that yes, Period Panties are about “embracing” your vagina, which on the surface seems more positive than covering it up with the various lotions, douches, and pantie-liners marketed to women to mask how our bodies actually smell and act. But the PPs still reinforce that vaginas are scary, which is why all those lotions and douches wanted to disguise them in the first place.

Hall: I sentence you to write an essay called “What I Talk About When I Talk About Periods” in which you explain yourself,  and then maybe we can talk. But I’m not giving any money to your horrible Kickstarter, the world doesn’t need “Cramp Stamp” tattoos that badly.

Meanwhile, I’m going to be in the next room, not having sex with you, watching the Anthony Michael Hall film A Bucket Of Blood. And no, you are not allowed to use that movie as one of your stupid underwear slogans, you mislead pantie peddler you.