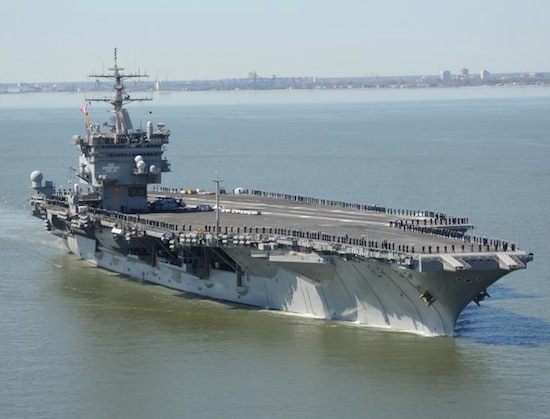 The USS Enterprise has set off on its final mission. No, not that one, the other one: CVN-65, the world’s first nuclear-powered aircraft carrier. Now having served the U.S. Navy for 51 years, the ship’s final deployment is a journey to the Middle East. During its half-century service the ship has racked up a remarkable number of achievements, including critical action in the Cuban Missile Crisis, tracking the progress of John Glenn in Friendship 7, several combat deployments, and currently stands as the Navy’s oldest warship.

Readers of the site will probably be more familiar with the Enterprise‘s roles in film than on the high seas. The 1986 film Top Gun featured the carrier prominently, and a pair of fuzzy dice have remained on the ship since the movie’s filming. Perhaps even more familiar to our readers was the Enterprise’s critical role in Star Trek IV: The Voyage Home. In that movie, the crew of the Enterprise (NCC-1701) beam aboard the Enterprise (CVN-65) in order to “borrow” some nuclear power and hijinks ensue.

Careful readers of Wikipedia will note that the ship used in the film was actually the USS Ranger, as the Enterprise was at sea at the time.

With half a century of service already under its belt, the final mission of the Enterprise will no doubt be a bittersweet occasion for its 4,000 person crew. Upon the Enterprise’s return, the carrier is slated to be scrapped, as the process of removing the ship’s nuclear fuel will do costly damage to the ship itself. Though its demise is assured, the Enterprise has already secured its place in history.