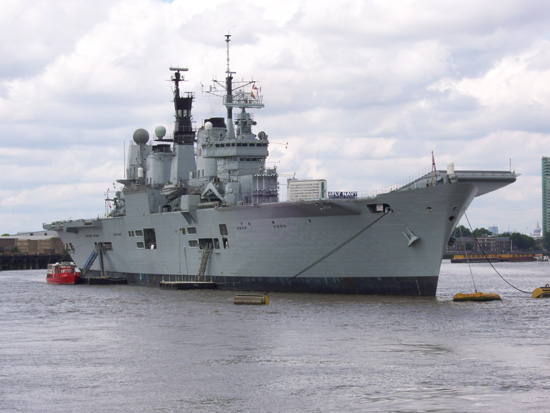 Huang Guangyu, formerly the richest man in China, is currently behind bars serving out a sentence on bribery and corruption charges. But that hasn’t kept him from remaining active: The mogul recently placed a bid on the aircraft carrier HMS Ark Royal, one of several ships the UK Ministry of Defense is in the process of auctioning off.

The bid for the ship was placed in Huang’s behalf by the Eagle Vantage Asset Management company. A spokesperson for the company announced that they intend to acquire the ship for use as a “floating exhibition hall,” to be moored off an as-yet undecided Chinese port city. There’s no word on how large a bid Huang has placed, but the winner is expected to be announced soon.

It’s important to keep in mind that China has collected quite a few aircraft carriers through sales like these. According to the Asia Times, two have been converted into floating theme parks. However, the most famous nautical purchase by China was the Varyag. An uncompleted carrier owned by the Ukraine, the Varyag was purchased in 1998 by a Chinese company who announced plans to convert it into a floating casino. Instead, the People’s Liberation Army Navy wound up in control of the vessel, which is currently being refitted for active duty as China’s first carrier. While the the Ark Royal is significantly smaller than the Varyag, the stated plans for a “floating exhibition hall” certainly do give one pause for thought.