Using a Wiimote to Simulate Getting Impaled 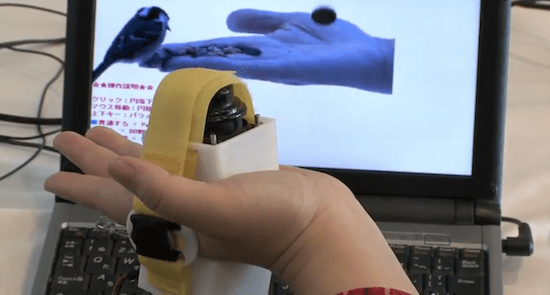 The Kajimoto research group at the University of Electro-Communications in Tokyo has developed a device that simulates an object passing through your skin, otherwise known as something a normal person really, really doesn’t want to have happen to their skin. The device uses a Wiimote to the movement of the subjet in 3D space, while a vibration device is placed on both the front and back of the chosen area of skin. A simulation on an accompanying computer screen depicts a ball passing through the participant’s hand, and when the on-screen ball hits the right part of the on-screen skin, the vibration device triggers and stimulates both sides of the skin, which supposedly achieves a sensation similar to something passing through one’s skin.

The device, which is being called a “phantom sensation device,” is being developed primarily to further the level of immersion in video games, but one would also assume the sex toy market is the other likely candidiate for this type of device.  Head on past the break to see a video demonstration that you won’t be able to feel because you don’t have a phantom sensation device strapped to parts of your body.

(UEC Tokyo via Akihabaranews via Geek.com)