Color Us Surprised: 60% of Facebook Users Don’t Trust That Their Info Will Be Kept Private

If Facebook’s has a reputation for not exactly being discrete with its users information, it’s got nobody to blame but itself. Automatic opt-in privacy changes that are difficult to edit and its CEO’s public stance that everybody should just wise up, step into the 21st century, and make all their data public and online do not exactly inspire confidence. And as Facebook prepares to go public in a somewhat different way, that is, with its initial public offering just a few days from now, it’s no wonder people are focusing on its sometimes contentious relationship with its userbase.

The Associated Press and CNBC got together to administer a poll to more than one thousand American Facebook users (who make up the largest national majority of the userbase) and Americans, and found that 59% of the users polled had little or no trust in Facebook to keep their information private. 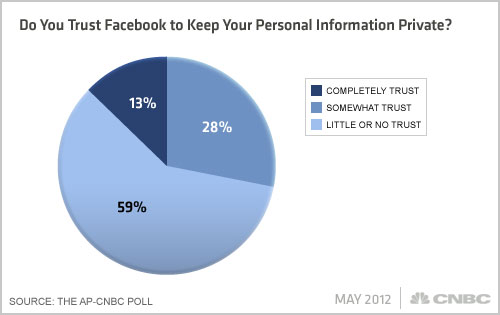 But as any cable service provider will tell you, in a market without much competition whether or not your user base actually enjoys the way you provide your service has a limited effect on whether or not they will deal with you. The problem for Facebook, if there turns out to be one, is that it’s a free service. Its revenue, $1.06 billion in the first quarter alone, was made primarily from clicks on the advertisements that Facebook generates for the pages of its users. However, as the AP-CNBC poll found, the vast majority of Facebook users never click ads. 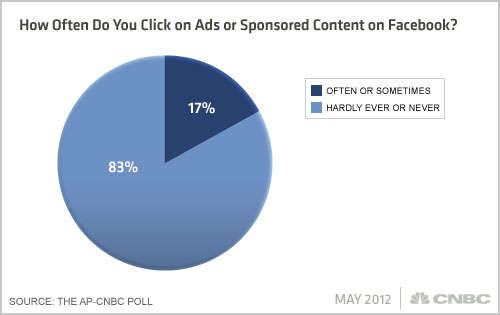 It should come as no surprise that if a company has an image problem with privacy, nobody wants to buy services through it either, another finding of the poll. And you can’t blame The Social Network for it: 70% of those polled said they’d never even seen it. Facebook is projected to be valued between $93 and $104 billion when it goes to public trading later this week.