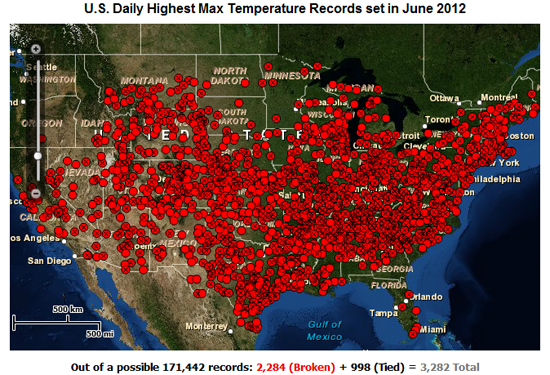 If you happen to live in the United States, chances are you’ve noticed it’s been a bit hot lately. That’s all anecdotal, sure, but folks across the States are saying the same thing: It’s too hot to go outside. But if you’re the sort that likes that have some data behind your whining, the National Climatic Data Center has some results that shouldn’t come as a surprise. During the month of June, the United States broke 2,284 daily high temperature records. It has now been confirmed that it has, indeed, been hot.

And that’s not all. On top of the 2,284 broken records, 998 daily high records were tied. Added together, the United States broke or tied around 110 daily high temperature records every single day of the month. According to NPR, in the first five days of July the U.S. broke another 942 records and tied 273 more. It is officially obscenely hot.

NPR also notes that, for the year so far, they’ve set 23,282 daily high temperature records whilst during the same period last year only 13,582 were broken. My rusty-but-accurate math puts this year at having a 71.4 percent increase in records broken. The maps created by the National Climatic Data Center when given the right parameters will spit out all of this and more.

Hopefully it will end soon for the sake of everyone looking to actually enjoy their time outside.