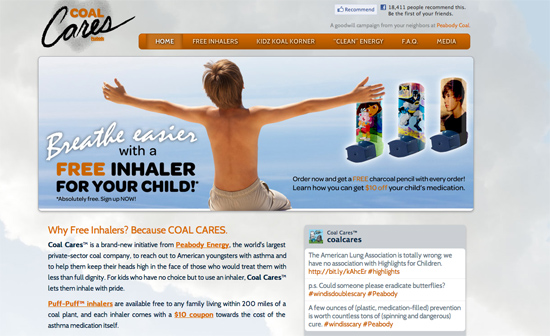 Peabody Energy, the world’s largest coal energy company, has been the target of an ingenious prank called “Coal Cares.” The site claims it is giving away free “cool” inhalers featuring the likenesses of Justin Bieber, My Little Pony, and others for kids who live within 200 miles of a coal-fire power plant. It also offers “fun” games and activities, likely chosen to help kids remain inside and asthma free.

The site is actually the work of prankster activists Coal is Killing Kids, who aim to counteract the lobbying efforts they claim Peabody is making to gut the Clean Air Act. That specific agenda aside, the Coal Cares website is a spot-on parody of the recent efforts the coal industry has made to paint itself as a green company. The soulless, questionable copy and generic clipart is dead on; you can almost hear a vaccuous wind blowing through where the faux-author’s heart used to be.

Read on after the break for a few choice quotes, and images from the ersatz campaign.

Coal power is, of course, solar power. That’s because millions of years ago, before coal began to form from decaying organic matter, the sun provided the energy that organic matter required to grow and spread. Other forms of fossil fuel—oil and natural gas—are also ways that Nature has found to store solar energy in ways that can be predictably, safely, and reliably released to power our lives.

But there are also much, much bigger potential problems associated with wind energy. Every science student has heard of the so-called “butterfly effect” from aptly-named “Chaos Theory”: namely, that the flapping of a butterfly’s wings in the wilds of Rio Grande do Sul, Brazil, can set off a massive, community-shattering tornado in Bunker Hill Village, Texas. If, as scientists state, a mere butterfly can cause a tornado so many thousands of miles away, imagine what a hill-full of wind turbines can do. 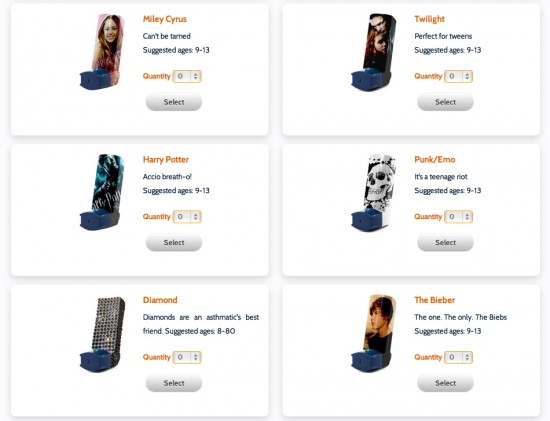