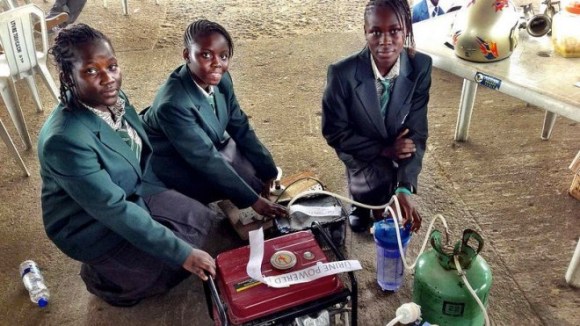 Don’t let the headline throw you off: This is an amazing, if a bit icky, story. A quartet of teenage girls in Africa, the eldest of whom is only 15, invented a urine-powered generator for last weekend’s Maker Faire Africa.

As Wired explains, “The chemical process [used by the generator] is pretty straightforward: an electrolytic cell is used to break the urea down into hydrogen gas, nitrogen, and water. The hydrogen gas is dehydrated through a borax solution, and then fed into a standard generator which burns it to produce electricity.”

Hydrogen gas can be dangerous work to work with, so Wired speculates that there “may be some important safety cations required” in running the generator, which can turn a liter of urine into into six hours of electricity. I’d say working with liters of urine can also be pretty dangerous, if only in a danger-of-vomiting sort of way. So hats off to Duro-Aina Adebola, Akindele Abiola, Faleke Oluwatoyin, and Bello Eniola for powering through (ba-doom-TISS) and making it happen. Theirs is definitely an invention that could bring a lot of good to the world—and, as pee-related technology goes, it’s a lot less ugh-inducing than the urine-to-drinking-water filter from Waterworld. (Yeah, I went there. Sorry.)