Even bees in Canada are good at recycling 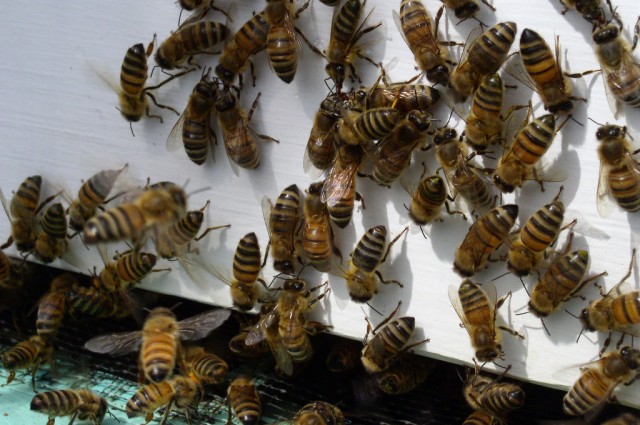 Today in tragic animal tales, apparently urban Canadian bees have been doing their darnedest to raise their young in hives made from plastic bags and sealant.

Researchers at the University of Guelph recently published an article in Ecosphere reminding us that, as always, mankind isn’t doing such a hot job of being stewards of the environment.

Much of our ecosystem depends on a healthy bee population, but not only are the busy l’il guys being decimated by the ominous Colony Collapse Disorder, but urbanization has reduced the availability of the leaves they typically use to construct their remarkable hives, forcing them to raise their little babees in garbage homes.

In the absence of leaves, it seems that urban bees (street-wise, cigar-smoking, leather-jacket-wearing bees) are seeking out garbage in which to lay their larvae. Author of the study Andrew Moore explained, “the plastic materials had been gathered by the bees, and then worked—chewed up and spit out like gum—to form something new that they could use.”

The city bees are so accustomed to adapting urban materials in order to survive that Moore says they seem to seek out garbage even in the presence of leaves. After analyzing how bees break the materials down to make their hives, Moore realized that they’ve even evolved to chew plastic differently than they would organic material, making it even clearer that city bees seem to have developed a preference for garbage over foliage.

Miraculously, Moore says that the larvae born in these hood hives was, surprisingly, entirely free of parasites-indicating that there may even be something in the bees’ slapdash building ingredients that prevents parasitic growth.

But don’t go patting yourselves on the back there, mankind. Just because bees are making the best of the horrible situation we’ve put them in doesn’t mean there’s nothing wrong with rapid urbanization, or that we wouldn’t be decimated by a bee extinction. It just means they’re an incredibly resourceful and interesting species who will probably be around a lot longer than us.

Go watch Bee Movie, consider the folly of man, and think about what you’ve done.