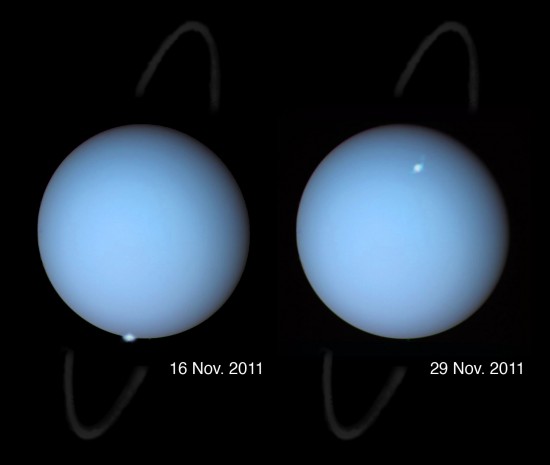 When Voyager 2 made its flyby of the strangely tilted planet Uranus, scientists got their first glimpse of what an aurora looked like on the icy blue planet. However, such lights have never been observed on Uranus from Earth, until last year when a team of scientists used careful planning and the Hubble Telescope to watch the lights on the distant planet.

The international team’s research will be published today in the journal Geophysical Research Letters. Wanting to catch auroras on another planet took some planning, however, as auroras are caused by the interaction between charged particles from the sun and a planet’s magnetic field. The team first had to wait for a particular arrangement of planets that allowed the solar wind from our star to have a clear shot at Uranus. Researchers then had to wait until the sun let loose a burst of charged particles, which happened in September of last year.

Once the burst was observed, the researchers figured that the particles would begin triggering aurorae on Uranus come November, and booked time on the Hubble. Their calculations proved correct, and on November the team spotted glowing dots in the thick atmosphere of the planet.

Observing aurora on Uranus wasn’t simply to say that it had been done. Uranus not only spins nearly on its side, the planet also has an off-kilter magnetic field. By observing how the magnetic field of Uranus functions with something we understand as well as aurora, the researchers hoped to learn much more about the magnetosphere of planets. Laurent Lamy, the lead researcher on the team, was quoted by the American Geophysical Union as saying:

“We have ideas of how things work on Earth and places like Jupiter and Saturn, but I don’t believe you really know how things work until you test them on a very different system.”

And you can’t get much more “different” than Uranus in our solar system.