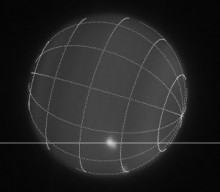 A few days ago, Dr. Heidi B Hammel announced on her Facebook page that a strange plume had been spotted in the lower hemisphere of the ice giant Uranus. Along with her announcement was a call for independent verification from amateur astronomers, with the goal of making the anomaly a “target of opportunity” for the Hubble space telescope.

The strange bright spot has been observed by the Gemini Telescope North in Hawaii, and is pictured to the left. The plume of light is apparently ten times brighter than the surrounding area, but still might be difficult for astronomers to spot without special equipment. The current thinking is that the glowing dots are an eruption of methane ice in the high atmosphere, only visible because it is above the dense cloud cover on the planet.

What’s weird about this eruption is that its cause remains unclear. However, Uranus has always been an oddball planet. Unlike other outer planets, Uranus is extremely cold. The going theory is that the violent impact, or impacts, that knocked the planet on its side also robbed it of heat in the process. When the Voyager probes skidded past some 30 years ago, they observed little weather on the blue planet.

The consequence of that is that because there is so little heat coming up from inside Uranus, its atmosphere is completely driven by force of sunlight essentially. And so because it has got this large tilt in its axis one pole gets continually illuminated by sunlight for 42 years during half of its orbit while the other is in darkness and then the situation is reversed for 42 years. The atmosphere is very strongly forced and that is a situation we don’t get anywhere else in the Solar System.

In short, extremely weird activity in Uranus’ atmosphere is worth our attention.

So, if you’re sitting at home with some sophisticated sky watching equipment and weren’t planning on doing anything else this Hallo’s Eve, point your eyes toward Uranus and see if you can’t shed some light on this mysterious planet. More information about what you’ll need to see the Uranus eruptions can be found over at Sky Mania.