TheMarySue.com Has Secured Their Rightful Twitter Name | The Mary Sue 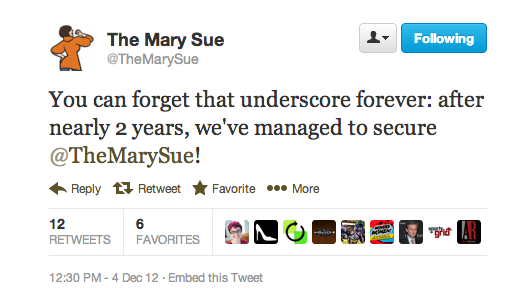 It was a long journey, and may lives were lost, but we are victorious! What was this epic battle you ask? Claiming @TheMarySue on Twitter. Allow us to explain our journey through GIFS.

When I first started at The Mary Sue, I asked Susana why we had the Twitter name @The_MarySue and not the more sensible @TheMarySue. This was her response:

Turns out, someone else already had that user name and wasn’t really using their account. So it’s understandable Susana felt like this:

So I resigned myself to this:

But this afternoon came a surprise…@The_MarySue username was no more! Susana had tweeted the message above saying we were officially @TheMarySue! But she didn’t tell me before she told all of you so I was like: