Another One Bites the Dust: UKNova Stops Sharing Torrents | The Mary Sue

Another One Bites the Dust: UKNova Stops Sharing Torrents 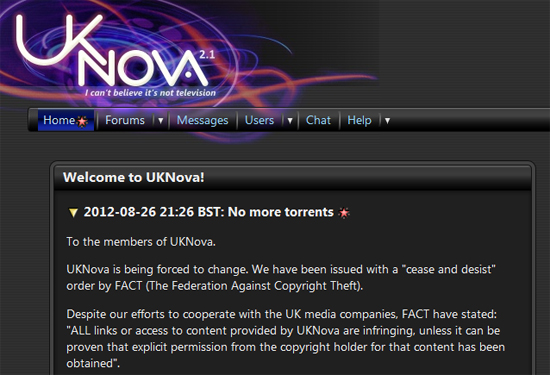 In what appears to be yet another win for the Federation Against Copyright Theft, or FACT, UKNova will now disable their torrent trackers in order to comply with a cease and desist order from the ever vigilant copyright monitors. UKNova had even previously been overwhelmingly selective with what they allowed in an attempt not to infringe. Looks like their strict policies didn’t keep them off the radar, unfortunately.

UKNova was designed to provide British television to those who had no other means of viewing it. If it was commercially available in any manner, like DVD or coming up on pay-per-view, they wanted nothing to do with it. In fact, they even disallowed references on their forums as to where to obtain such infringing material. Going that extra mile, if something previously available via torrent suddenly became commercially available, they’d expire the tracker for it in order to avoid revenue loss for the copyright holder.

That isn’t to say that they weren’t in somewhat murky water. “Whilst we believe that FACT are wrong both legally and morally on account of the strong ‘no commercial content’ stance that we have always taken,” a statement from UKNova reads, “we are not in a position to be able to risk lengthy and costly court battles to prove this” Essentially, though they consider themselves on the right side of the law, they don’t have the means necessary to fight a protracted legal battle.

Given that the owner of popular piracy site Surf The Channel was just sentenced to four years in prison after FACT decided to go snooping, an immediate withdrawal of all “offending” content certainly seems like the most logical choice. A belief that the law would see things your way probably isn’t the most solid foundation to stake the next four years of your life on.