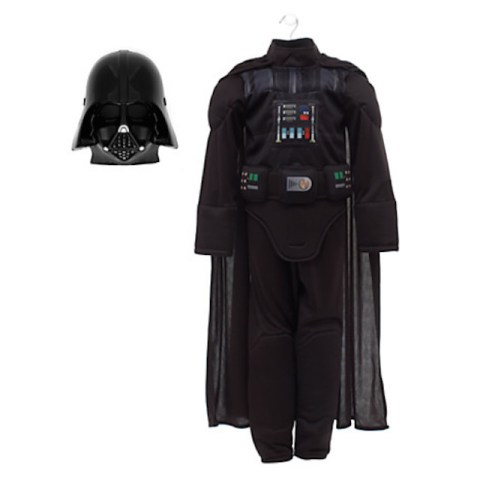 When you visit the US Disney store online, the menu bar has “girls” and “boys” product sections prominently displayed, but the UK version of the site has done away with these after a little girl told them how much she wanted to be Darth Vader. Yes, that warming sensation in your chest is, in fact, your heart.

The Guardian reports that young Izzy Cornthwaite wanted nothing more than a Darth Vader costume and lightsaber for her eighth birthday, but she was disappointed to see that the costume on the UK Disney store site was labeled “for boys.” Luckily, her mother, Rebecca, wasn’t going to let her dreams of ruling the galaxy with an iron—or whatever metal Vader is made of—fist be dashed so easily.

When Izzy told her mother through tear-filled eyes, “I can’t have it, it says they’re only for boys,” Rebecca convinced her to write Disney a letter about how sad the gender stereotyping had made her. Perhaps surprisingly with how ubiquitous such things have been in toy marketing, she received not only a response, but a complete change of the situation. According to The Guardian, her response read, “The description for this costume has now been amended as we understand that all our little Jedis enjoy Star Wars.”

But beyond that, Disney’s UK online store no longer categorizes toys by gender at all. In the top menu bar, the site only has a general “kids” section where all children’s toys are housed. Way to change the world, Miss Cornthwaite—or should I say Sith Lord Cornthwaite? Her mother had a few more wonderfully inspirational words that clearly display how Izzy wound up such a force to be reckoned with:

If you visited a toy shop, you would actually see boys and girls going to their respectively gendered aisle. Some might argue, ‘What does this matter?’ We know that women are underrepresented in many work roles and I feel very strongly that I don’t want Izzy to avoid a career later in her life because it is a ‘boy’s job’, when I know she is capable of doing anything she sets her heart on.

Damn right. A lot of people wonder why we get so adamant about gendered toy marketing, but we think this logic is pretty obvious. Aside from that, who would want to make a child cry when it can be avoided? There is nothing to be lost by getting rid of the gender coding on toys, but it could mean everything to kids—of either gender—who feel left out because they’re told by advertising and toy stores that the toys they want to play with aren’t for them.

Are you listening, US Disney store? We’ll be waiting for the switch to a “kids” category instead of the current gendered ones very impatiently.