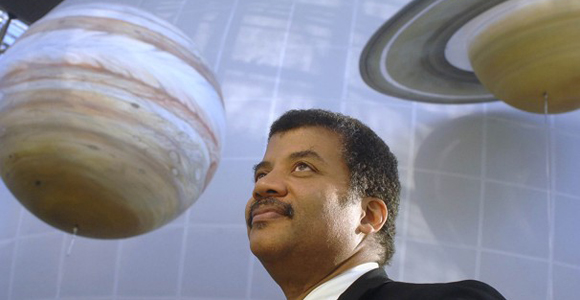 In case you’re not familiar, Krypton is the birthplace of Superman as well as Supergirl, Power Girl, Krypto the Superdog, etc., etc., etc. It’s a fictional planet created by Jerry Siegel and Joe Shuster and in Superman’s origin, exploded just after he was rocketed to Earth by his father. It’s been given a few general locations in space but Tyson believes he’s found out exactly where it lies – in the Corvus constellation, 27.1 light years from Earth, orbiting the red dwarf star LHS 2520.

We’re well aware Tyson is a huge geek but why did he start looking for Krypton? DC Comics had a storyline going in Action Comics about the search for the long lost planet. “One of our staffers reached out to him to see if he’d assist for a story we were doing, and he actually came up with a location,” DC co-publisher Dan DiDio told the New York Post.

Tyson took what information they had and based his work around that. The Post writes, “The [red] star, which is smaller and cooler than our sun, can be seen at right ascension 12 hours, 10 minutes, 05.60 seconds, and declination 15 degrees, 04’ 15.66…[The planet’s] distance of 27.1 light years — roughly 150 trillion miles — coincides with the age Superman is supposed to be in the comics.”

“As a native of Metropolis, I was delighted to help Superman, who has done so much for my city over all these years,” said Tyson of the honor, which doesn’t stop there. Tyson’s illustrated likeness will make an appearance in this week’s Action Comics #14.

“By applying real-world science to this story, he has forever changed Superman’s place in history. Now fans will be able to look up at the night’s sky and say, ‘That’s where Superman was born,'” said DiDio.