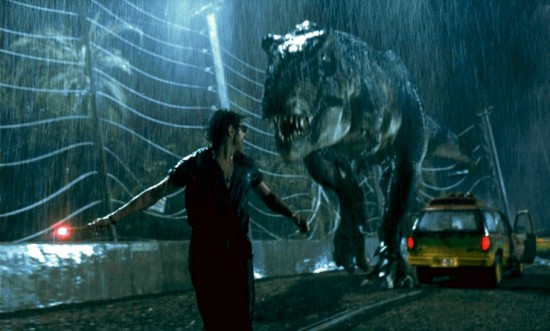 A team of U.S. and British scientists have employed the use of three-dimensional laser scans and computer modeling to weigh five Tyrannosaurus rex specimens, including the largest and most complete T. rex skeleton, “Sue,” owned by the Chicago Field Museum. The team found that Sue would’ve actually weighed 30 percent more than expected, around 9 tons. The smallest, youngest specimen weighed by the team weighed in at less than previously thought, suggesting that during a T. rex’s growth years (10 to 15 years of age), when they were busy listening to music their parents didn’t like and refusing to do math homework, they actually grew more than twice as fast.

John Hutchinson of the Royal Veterinary College in London puts the rapid growth into perspective:

“At their fastest, in their teenage years, they were putting on 11 pounds or 5 kilograms a day. Just think how much meat that is. That’s a hell of a lot of cheeseburgers … it’s a whole lot of duck-billed dinosaurs they needed to be chowing down on.”

The quick rate of growth also suggests that they probably had a high metabolic rate, giving credit to the idea that the T. rex was warm-blooded. Hutchinson also points out that, due to the large body mass, the T. rex wasn’t particularly fast, clocking in at around 10 to 25 miles per hour, though a speed that wouldn’t have them crawling at an inordinately slow pace.