The Triceratops May Not Be A Real Dinosaur [Update] 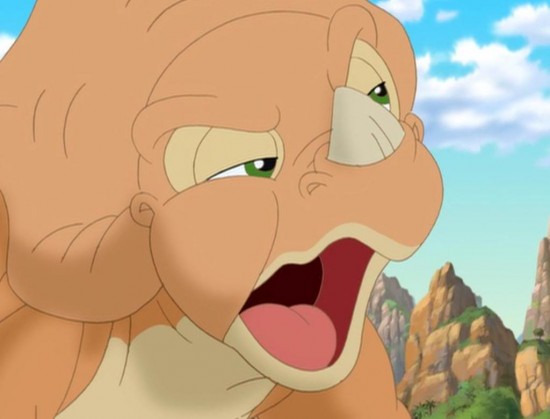 I don’t know what to believe anymore. First Pluto takes the bullet, and now this: The triceratops may have never existed. Two paleontologists are now arguing that the three-horned dinosaur species — perhaps first made iconic with “Cera” (pictured above) in the classic 1988 animated film The Land Before Time — is simply the juvenile form of the “torosaurus,” a dinosaur with differently-angled horns and a longer, thinner, and smoother frill with two holes.

Needless to say, we were speechless.

Update: A tipster with a background in the life sciences tells us that this storyline has been overblown.

“we’ve known for a few weeks that a torocerotops is actually a triceratops
http://blogs.smithsonianmag.com/dinosaur/2010/07/22/new-study-says-torosaurustriceratops/
this is just confusion”

Since the triceratops was discovered before the torosaurus — in 1887 versus 1889 — scientific naming conventions would have it that if the two are the same species, ‘triceratops’ would be the correct name, not ‘torosaurus.’ So if anything, the torosaurus may not ‘be a real dinosaur,’ though this probably won’t particularly upset anybody’s childhood.

John Scannella and Jack Horner from the Museum of the Rockies in Bozeman, Montana believe that the triceratops may have had immature spongy bone tissue, being in an intermediate stage of “shape-shifting,” a physical process undergone by dinosaurs. According to the claim, as the supposed triceratops aged, its “three facial horns” changed in shape and orientation, and its “short, thick neck-frill with a saw-toothed edge” lengthened, thinned, and smoothed out, eventually becoming fenestrated. “Even in the most mature specimens that we’ve examined, there is evidence that the skull was still undergoing dramatic changes at the time of death,” Scanella told New Scientist.

The only modern animal with a similar function is the dinosaur descendent, cassowary, which develops a large spongy crest after its skull has grown to 80 per cent of its full size.

Some dinosaur fans, however scientifically inclined, are in denial. Dino Ignacio, for example, has set up “Save the Triceratops” pages on Facebook and BuzzFeed, writing:

Scientists are saying that the Triceratops dinosaur—you know and love, was actually a juvenile form of a Torosaurus, the three horned dinosaur you don’t know and don’t love. Heart this buzz or join our Facebook page to help us tell those pesky scientists that they can take Pluto and the Brontosaurus.. but they can’t take our Triceratops!

Of course, the scientific use of “Brontosaurus” had officially been removed by the early 20th century when paleontologist Elmer Riggs pointed out the Brontosaurus excelsus was of the same genus as Apatosaurus ajax. By then, however, the original name had taken hold in the popular consciousness.

So may the triceratops live on in our popular imaginations! It should be noted though that some other Internet users are not as resistant to the news. One “chrispgriffin” tweets: “Whatever, Cera was a dick in Land Before Time anyway.”