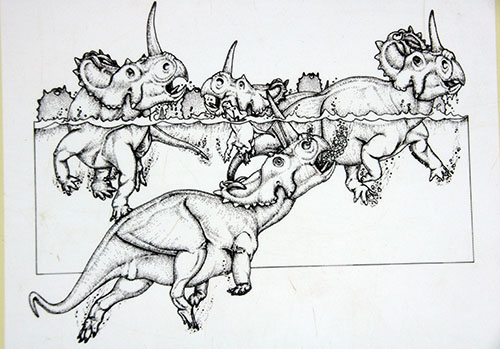 Paleontologists in Alberta have found a dinosaur bone bed covering an area of nearly one and a half square miles, making it the largest such bed ever discovered.  It contains the remains of thousands of Centrosaurus apertus, a species whose closest famous relative is of course the Triceratops.  Previous discoveries of these animals provided the first evidence that some dinosaurs lived in herds.

Now, based on the new bone bed, paleontologists are drawing new conclusions.  First, that some ceratopsian herds may have been much larger that originally thought, with individuals numbering in the “high hundreds to low thousands.”

I’ll give you a moment to visualize a group of these 18-20 foot long animals of that size.

The other conclusion is that these sorts of bone beds were not created when centrosauri drowned while fording a river, but by a massive, deadly storm; ruining any hopes of a dinosaur themed Oregon Trail.

From The Globe and Mail:

“Data from this mega bonebed provide pretty clear evidence that these and other dinosaurs were routinely wiped out by catastrophic tropical storms that flooded what was once a coastal lowland here in Alberta, 76 million years ago,” said David Eberth, a senior research scientist at the [Royal Tyrrell] museum, the lead author on the study…

With no high ground to escape to, most of the members of the herd drowned in the rising coastal waters. Carcasses were deposited in clumps across kilometres of ancient landscape as floodwaters receded.

“It’s unlikely that these animals could tread water for very long, so the scale of the carnage must have been breathtaking,” said Mr. Eberth.

Just one more thing to worry about when looking for the Great Valley.