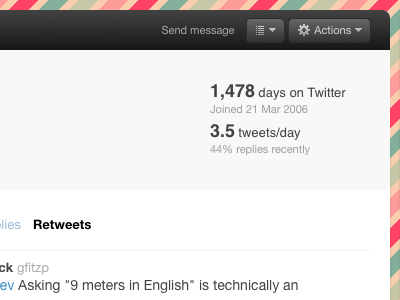 We’ve already seen evidence of Twitter‘s hinted plan for a new look, most recently in the form of its homepage redesign. But now, Twitter’s creative director Doug Bowman has posted a picture of what he says “may end up a significant redesign” for the site’s interface, complete with “days on Twitter,” “Tweets/day,” and percentage of @ replies, which could be an appealing measure of engagement on the service, provided Twitter finds a way to weed the spambots out.

Twitter’s Chirp conference will be taking place on the 14th and 15th of next week in San Francisco, complete with keynotes and a 24-hour “hack day” for developers, and we wouldn’t be surprised to see more big Twitter news come out of that.