According to Twitter, Everyone Is Getting Sadder | The Mary Sue 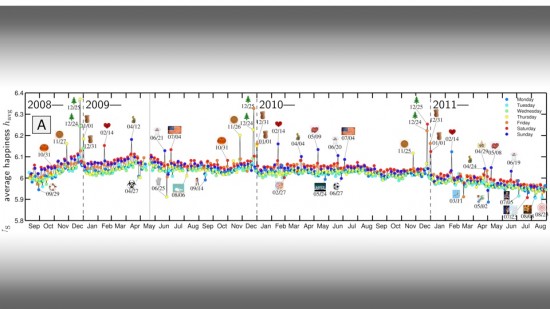 On a few separate occasions, people have endeavored to use Twitter as a way to track our collective mood across the globe. A team at the University of Vermont have decided to get in there and take another look. Their findings? Everyone is getting sadder. Woo. The way this kind of analysis works is by snagging tweets from the public timeline and taking stock of their emotionally charged words. Said emotionally charged words were determined by volunteers who rated the 10,000 most common ones on a scale of happy-slappy to bummer. Words like “laughter” and “food” are happy words, “greed” and “terrorist” aren’t. After the whole analysis, however, it can be seen that the overall saturation of happy words is going down.

Now, if you’re going to try and extrapolate this study’s findings — that there is now a lower concentration of “happy words,” as determined by volunteers, in tweets than there were before — to an overall statement about the actual happiness of the world, you’re going to have a little trouble. I mean, you have to consider the bias of who uses Twitter, and the bias of what Twitter users tweet about, and the problem of sarcasm and irony and about a million other things. Still, it’s interesting to see that the little line is going downwards, even if that doesn’t really mean much in the grand scheme of things. I think the real lesson to be learned here is that everybody needs to start tweeting about their food more. Like, a lot more.