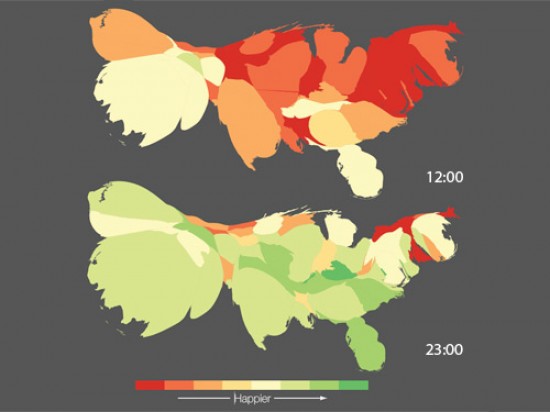 Researchers at Northeastern and Harvard have used the wealth of data available on Twitter to paint a picture of our national mood throughout the day. Running about 300 million tweets through a system called Affective Norms for English Words (ANEW), which assigns a positive or negative emotional value to words, they were able to unearth some surprising trends.

For instance, people on the West Coast appear, according to the data, to be “significantly happier.” There’s also a nationwide rhythm to happiness throughout the day: The early morning and late evening appear to be the happiest times throughout the day, with the period from about noon to 3pm EST being the least happy. Looking at weekly trends, weekends are unsurprisingly happier times than weekdays, with the peak of happiness occurring on Sunday morning and the pits coming on Thursday night.

There are some flaws to the methodology, starting with the relative crudeness of ANEW as an accurate gauge of happiness; as New Scientist points out, the word-by-word method means that “if someone tweets ‘I am not happy,’ the team’s method counts the tweet as positive because of the word ‘happy.'” At that, the researchers believe that the huge sample size washes these errors out, and the consistency of patterns both on a nationwide scale and within regions confirms that they’re more than just noise.

Here’s a larger infographic created by the researchers; click to see it fully sized. 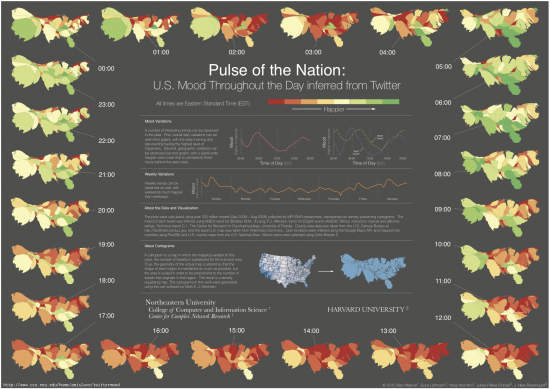 And here’s a time-lapse video of moods throughout the day: