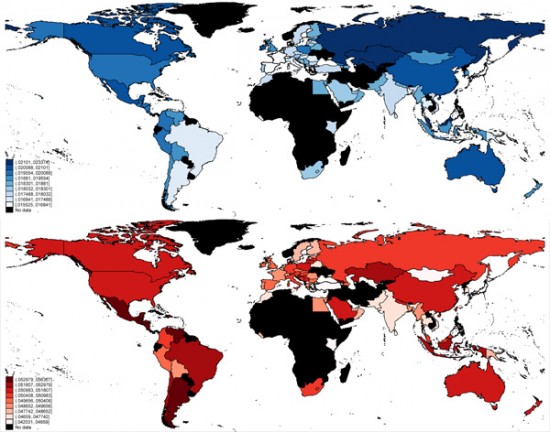 For years, researchers have suspected that moods on the whole tend to swing from happy to sad and back again in concert with with variables like amount of sleep, amount of daylight, and length of the work day. Seems pretty intuitive, right? Well until now, researchers didn’t have too many good ways of actually verifying this theory. The options available tended to be very subjective and have relatively small scopes which made it hard to get any sort of conclusive evidence that was global instead of very specific.

Now, by using Twitter, researchers at Cornell were able to find a solution to that problem. By tracking 2.4 million people in 84 different countries over the course of two years, Scott Golder and Michael Macy were able to analyze trends globally and publish their results in a paper called “Diurnal and Seasonal Mood Tracks Work, Sleep and Daylength Across Diverse Cultures.” They didn’t read the tweets themselves, of course, but rather fed them through software designed to analyze the tweets and were able to finally pick out some universal, global trends.

They found that every day had two peaks where there was a concentration of positive tweets: Early in the morning and then again towards midnight, suggesting that working tends to displace positive feelings, pushing them to before and after the work day. On the weekends, there were similar peaks, but the morning peak occurred, on average, about 2 hours later because who doesn’t like to sleep in, right?

These spikes weren’t exactly the same across the globe though. Obviously, they rolled along time zones, but there were also some cultural differences that affected the placement. In the United Arab Emirates, for example, the weekend tweet pattern was still present but happened on Fridays and Saturdays because the work week there tends to be Sunday through Thursday.

The pair also took a look at the way daylight correlated with the number of positive tweets to see if the perception of “winter blues” is a real thing. It sort of is. While the data didn’t show any strong correlation between absolute amount of daylight (folks in sunnier parts aren’t particularly happier than people in darker areas) they found that the relative amount of sunlight did have a correlation. So more sunlight might not translate into happiness, but increasing amounts of sunlight do. Likewise, it’s harder to be cheery when the days are shortening in front of your very eyes.

In a lot of ways, the results make perfect sense, but they also raise some questions. How likely are people to tweet about certain feelings and activities? Are people really just as likely to tweet their positive feeling as their negative ones? If it swings either way, it might skew the entire study’s results in one direction or another. In a way, this whole study is built on the idea that people everywhere are sharing their true feelings all the time and borderline over-sharing. Whether or not that is a reasonable assumption is up for grabs.

The study itself is here, but behind a paywall.