A 57-Hour Long Stream of Donkey Kong 64 Raised $340,000 for Transgender Kids & Reminded Us That the Online Gaming Community Doesn’t Belong to Bigotry 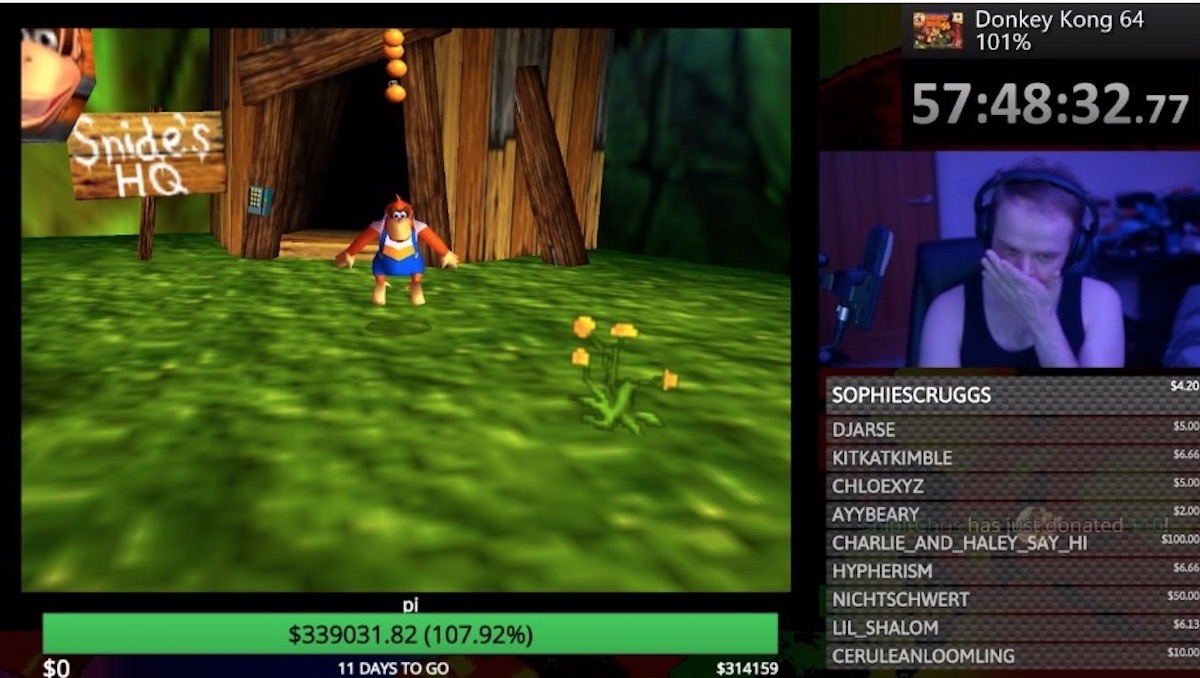 This weekend, HBomberguy, aka Harry Brewis, streamed a 57-hour-long game of Donkey Kong on Twitch. One of his goals was to “destroy Donkey Kong 64,” a game he said he “never finished properly as a kid.” So now, he was determined to beat the 100% completion rate for the game’s achievements and said he wouldn’t stop playing until he was done.

His other goal was to raise money for Mermaids, a UK-based charity designed to support gender diverse and transgender children, teenagers, and their families.

In a recent, now-deleted post on a parenting website, Graham Linehan–the once-relevant creator of shows like Father Ted and The IT Crowd who now appears to have dedicated his entire online presence to spreading anti-trans rhetoric–encouraged others to contact the National Lottery regarding their funding of Mermaids. In response to the campaign, the Big Lottery Fund decided to review their £500,000 grant to the organization.

“Well done, Graham!” HBomberguy said in his announcement video. “You have a massive audience and the power to choose to fight for progress in all the many forms we need in the world right now and you used it to make sure some children won’t have access to helpful resources.”

.@Glinner is urging @MumsnetTowers users to pressure @BigLotteryFund to take money away from @Mermaids_Gender, a vitally important charity for young people and their families. My childhood would have been far less difficult with them. Let Big Lottery know if you feel the same way pic.twitter.com/VTzRd2s8oy

HBomberguy set up a meager fundraising goal of $500, which he surpassed before his Donkey Kong 64 stream even started. Over the next 57 hours and 48 minutes, he raised an incredible $340,000.

In addition to the money, Brewis created a sort of community forum for people to talk about the issues at hand. Some incredible guests dropped in to join the stream, including Chelsea Manning, Mara Wilson, John Romero, and Alexandria Ocasio-Cortez.

Here’s @aoc talking about how Nintendo 64 was the best system. She’s on @twitch helping to raise money for trans kids. pic.twitter.com/cJIfUif1mv

The support of these high-profile figures no doubt played a huge role in the amount of money that was raised. But Brewis also created a space for trans people, and not just celebrities, to discuss their own experiences.

The unexpected appearance of @AOC on the @twitch livestream was a highlight.

Yet what made it truly special was the moments when @Hbomberguy gave his platform over to trans voices talking about trans issues and their own personal experiences.#TheExperts https://t.co/hOjChPPv6E

Since the stream has ended, too, he’s been encouraging cis people who want to talk to him to (per The Guardian) “please talk to trans people instead … this weekend has shown their voices still need to be heard.”

Politics and gaming have always gone hand in hand. But usually, it’s the worst of both that rise to the surface. We saw this with Gamergate. We saw it when Steve Bannon decided to mine Gamergate communities for a new crop of Trump voters.

Arts Technica’s Kyle Orland nails it when he writes that “These days, Twitch is just as often a place where watching video games serves as a convenient excuse to gather with like-minded streamers and viewers in the closest thing we have to a live digital town square.”

Brewis’ stream proved that that town square isn’t reserved just for the awful conversations, and that misogyny, racism, transphobia, and other forms of bigotry don’t have a monopoly on public political discussion in gaming communities. Just watch how the chat bar explodes with positive comments as Ocasio-Cortez switches easily between her opinions on the N64 and how trans discrimination impacts economic instability. There’s a lot of toxicity in public gaming spaces, but there’s a lot of love there, too, and we won’t forget it.

There is so much more work to be done, in so many places. And we can do it, together.
A brighter world is there for the taking.