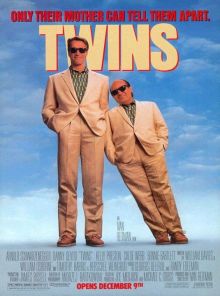 Though a fairly big comedy sequel announcement was made a couple days ago on Conan, when Will Ferrell dressed up as Ron Burgundy and announced Anchorman 2, The Hollywood Reporter brings us even better sequel news today: Twins, the 1988 movie featuring Arnold Schwarzenegger and Danny DeVito as the titular twins, will be getting a sequel. Called Triplets, the third, newly discovered brother to the Schwarzenegger-DeVito pair would be Eddie Murphy. This legitimately sounds great.

The Hollywood Reporter reports that Universal and Montecito Picture Co. are set on making the sequel, though as of yet, there is no script, and no director attached to the project. Twins director Ivan Reitman will act as producer, but as of now, will not reprise the role of director.

Now that Arnold is no longer the Governator, we can only hope that he gets back into shape and back into Hollywood. Sequels to pretty much most of his older movies would be welcomed in modern times, the era of remakes and YA books turned movies. Would you go see a modern day sequel to Junior, the movie where Arnold became pregnant? Of course you would — if anything just to see how ridiculous it’d be. What about a sequel to Kindergarten Cop? The movie that taught us that boys have a penis and girls have a vagina, and also that you probably don’t have a tumor. It’d also be pretty great if he could get himself back into shape and play prominent roles in some action films before he’s too old. Also, it’d be pretty great if he took the Lethal Weapon 4 route and did some actions movies where the whole point is that he’s too old for it.

The point here is that we need Arnold back in our entertainment media, and his silly-but-fun comedy movies are a pretty good place to get that boat sailing again. And as for Eddie Murphy? He hasn’t exactly been out of the movie scene, most recently starring in Tower Heist, but maybe this excellent piece over on Grantland by Bill Simmons will remind you just how awesome and important Eddie was once upon a time.

Triplets sounds awesome, and we can only hope there are no snags along the way.