This Person Let Himself Be Blindfolded While He Got a Twilight Tattoo, So It’s Covered Up Now 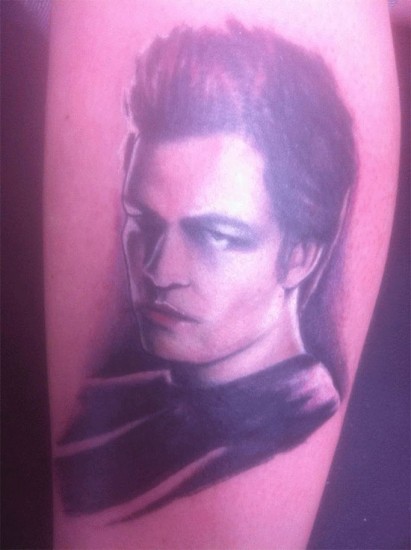 Okay, so, as the resident heavily-tattooed lady at The Mary Sue (Jill sports a couple, I sport over 20), stories about geek tattoos elicit all kinds of reactions from me. Oftentimes, my reaction is joyous, because there is nothing more beautiful than waving one’s geek flag in the form of a gorgeous, well-thought-out work of body art. However this story did not make me feel joy. It made me feel annoyed. At a wasted opportunity. And at carelessness. Tattoos are a commitment, and this person got the tattoo above, of Edward Cullen from Twilight, while blindfolded, on a bet. The good news is that it was covered up with something spectacularly geeky and far superior. The bad news is that this happened in the first place.

Now hear this: I am not bashing Twilight tattoos. If that is your thing, and that’s how die-hard Twihards want to express themselves, then I will never judge them. Especially if the work is good, and it sure as heck can be. In fact, the portrait piece above really isn’t terrible — if you had chosen to get that on you on purpose. The reason the coverup below is superior is because it was actually a choice, part of a thought process, and not a stupid game. And here’s the story about the bet, from a Geekologie reader:

OK, so this guy I used to know recently made a deal with his friend that they would choose each other’s tattoos and they would each get theirs while being blindfolded. He took his blindfold off to see this — Edward, from Twilight! Yikes! So later he had it covered up with RUFIOOOO!

Before I get into why this makes me so upset, here is the admittedly excellent Rufio (from Hook) coverup: 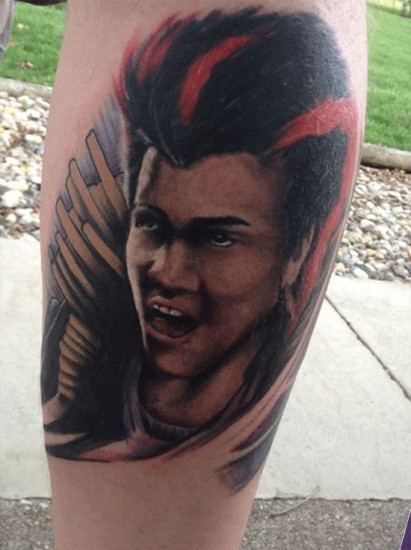 Okay, look: There is certainly an element of “live and let live,” and that includes letting others make horrible decisions without allowing it to interfere with one’s own life. Fine. I won’t dwell on it all day, but there’s no way I’m going to let that image come across my eyeballs and then not feel a feeling of some sort.

Tattoos are supposed to mean something, and the people who get them generally don’t take them lightly. So when someone treats them like no big deal (um, they’re permanent and needled into your skin, you know), some of us don’t really appreciate it. As I said, it’s not about what this guy got — it’s how he got it. He didn’t choose it, and he didn’t even see it until it was done. And then he covered it up. He never owned it. We own our skin and our bodies, and if you choose to put things on them, you need to own them. This guy just flippantly gingered into a tattoo parlor with a (mean) buddy and played a game of Russian roulette with his own flesh. That’s just stupid.

But that’s an amazing coverup, so I can’t be that upset.