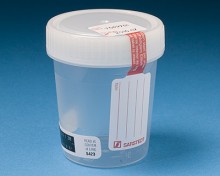 Next up in science’s fight against global warming isn’t proving to a very specific group of people that global warming actually exists, but instead is a special potion made of urine that can absorb carbon dioxide.

We all know that carbon dioxide contributes to — except for the people that don’t “believe” in it — global warming, so a decent way to curb global warming is to lower or remove the amount of carbon dioxide floating around. Naturally occurring objects, such as trees, help to absorb some of the carbon dioxide, but as advanced as the human race currently is, trees and the ocean aren’t enough of a drain on the amount of carbon dioxide we output. In order to curb the CO2, we’d have to find some other readily available substance that can help out. Manuel Jiménez Aguilar, author of a recent study published in the Journal of Hazardous Materials, feels urine can be that readily available substance that can, ironically, help clean up the planet.

“For every molecule of urea in urine, one mole (a chemical unit used to measure the quantity of a substance) of ammonium bicarbonate is produced along with one mole of ammonia, which could be used to absorb one mole of atmospheric CO2.”

However, urine decays, and it’d need to be kept fresh somehow, and it wouldn’t be efficient to, for example, require people to line up by the millions at some type of deposit bank whenever they felt nature calling. In order to keep urine fresh enough to send to the front lines in the war on carbon dioxide, Aguilar suggests adding a basic preservative — in this case, olive waste water, which is the resulting liquid when ground olive paste is spun. That’d make a urine-and-olive cocktail, if you’re keeping track of all the science.

Aguilar states that the urine-and-olive mixture can absorb “various grams” of CO2 per liter, and could reduce CO2 emissions by one percent. Aguilar also notes that the mixture can be inserted into common objects, such as chimneys, so the gasses can pass through the liquid and leave a little carbon dioxide behind before it hits the open air. Aguilar also notes, though, that any objects using the urine mixture should also have some kind of mechanism to drain the urine mixture when it’s full of carbon dioxide, and refill the objects with a fresh mixture.

This new system would also allow for waste water to be recycled and put to good use, rather than — no pun intended — wasting away. Of course, all of this information is from a study, rather than a some kind of widespread application, so we’ll just have to wait and see if we’ll be saving the planet’s atmosphere whenever we drink a Red Bull and take a subsequent trip to the bathroom.