It's as I always suspected: Nothing good can come from helping anyone do anything. Don't ever leave your house. 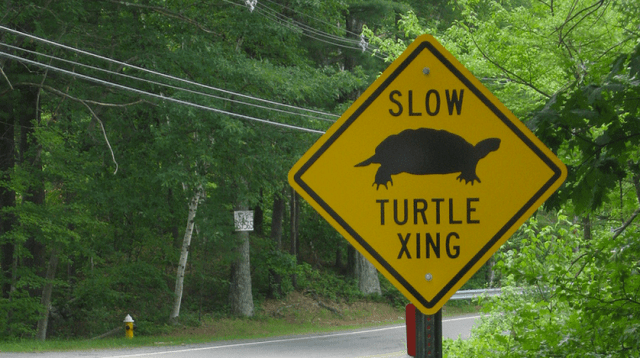 In a show of perverse irony handed down to us from the Universe, a 70-year-old man in Waukesha County, Wisconsin was attempting to assist a local turtle in distress when he accidentally stepped in front of a school bus and was struck, sustaining non-life threatening injuries and traumatizing a whole bunch of children. Not the turtle, though, of course. She got away just fine. So at least it’s an only mildly disastrous story instead of a nihilistically tragic one. Hooray?

The man picked the turtle up and intended to walk with it across Highway 59, but neglected to actually look before he stepped out into road and “didn’t see the bus coming,” according to local news sources. None of the passengers —  five adults and 49 schoolchildren, all of whom just learned a very valuable firsthand lesson in road safety that George Bluth Sr. himself could not have planned better — were injured, and the man was treated at the nearby Waukesha Memorial Hospital.

Turtles were once a much more common sight in Waukesha Country from May to July, when females trek uphill to lay their eggs far away from the aquatic areas in which they actually live. The Department of Natural Resources in Illinois believes the highways that have gone up between the turtles’ habitat and their nesting grounds has done a lot to significantly lower the native population of turtles.

Here’s the kicker, though — that turtle is probably going to lay a whole bunch of eggs, and all those baby turtles are going to have to cross the street back down, and who is going to help those turtles? Probably no one, because they’ll think “the last guy who helped a turtle in this town got hit by a bus,” and move on. So thanks a lot, guy, your “good deed” just sentenced a whole future generation of turtles to grisly bus death. I hope you’re happy.

Note: A previous version of this story incorrectly stated that it was Illinois in which this occurred. It was actually Wisconsin.

(via JSOnline, image via herzogbr)