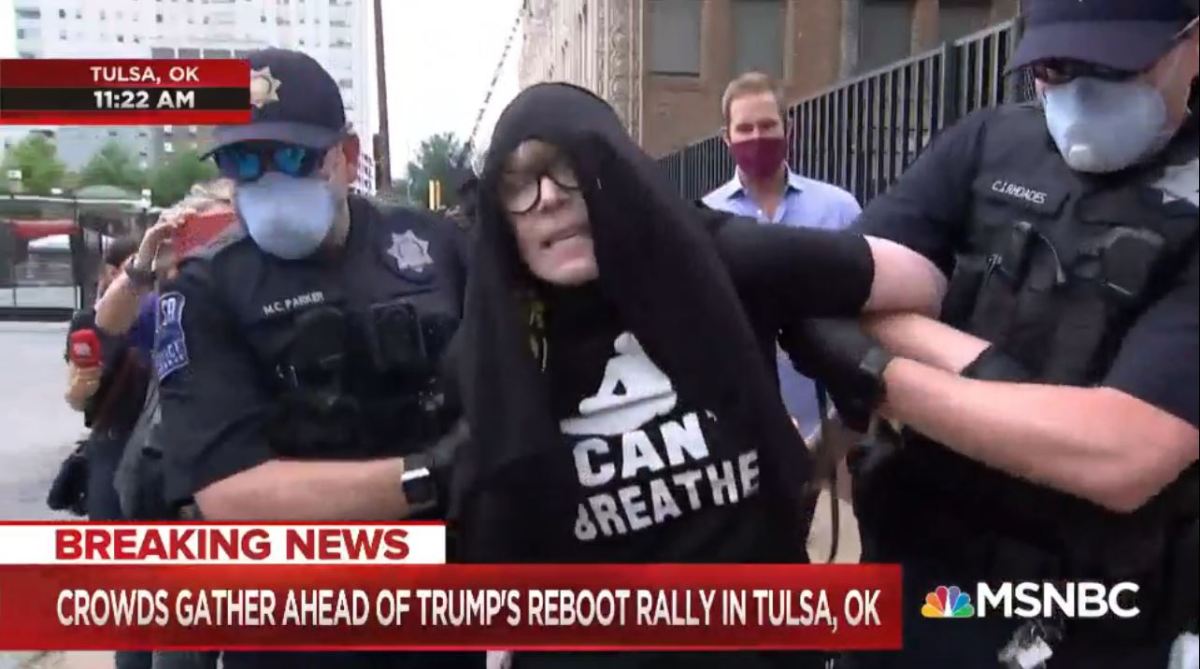 As crowds of MAGA people gather for Trump’s rally/Coronapalooza tonight, the Tulsa police are leaning into their authoritarian instincts. The police arrested a lone woman protester, Sheila Buck, who was sitting quietly while wearing a shirt in support of Black Lives Matter that read “I Can’t Breathe.” The police told Buck she was trespassing in an area for ticket holders, when Buck in fact had a ticket for the rally. After refusing to move, the cops hoisted her up and arrested her, dragging her away from the rally.

"Somebody has to do this."

A peaceful protester is arrested outside the location President Trump's rally will be held in Tulsa, Oklahoma, on Saturday. pic.twitter.com/Nj23OgyOvX

In a Facebook post after the arrest, the Tulsa Police Department posted that “Ms. Buck was in an area that is considered a private event area and the event organizer, in this case the Trump Campaign, can have people removed at their discretion.” They ended up booking her on obstruction, and her $500 bail has since been paid.

The police also said that Buck was trespassing on a “sterile area” of the rally, which is ironic since the crowd largely eschewed masks or social distancing. Trump himself will not wear a mask, and his press secretary Kayleigh McEnany has said she won’t wear one either. In fact, 6 of Trump’s campaign staffers working the rally have tested positive for COVID-19, and health officials have warned citizens that the rally could very well be a super-spreader event.

This comes after Trump threatened “protesters, anarchists, agitators, looters or lowlifes” via Twitter with a violent response. This also comes as countless people across the globe are marching to protest police brutality.

Any protesters, anarchists, agitators, looters or lowlifes who are going to Oklahoma please understand, you will not be treated like you have been in New York, Seattle, or Minneapolis. It will be a much different scene!

Trump’s Tulsa rally is his first since the pandemic, and the president is clearly desperate to get back in front of his adoring crowds. The rally was originally scheduled for Juneteenth, but was then rescheduled for today. Trump has since claimed publicly that he was responsible for making “Juneteenth very famous.”

But this treatment of protesters is hardly surprising. Between Trump’s authoritarian tendencies, COVID-19, and the militarization of an unchecked police force, the rally is unsafe for both Trump supporters and protesters alike. I shudder to think what the police would have done if Buck were Black.

Let’s call this plainly what it is: the police doing the bidding of their fascist president and arresting American citizens for no reason. For all the crowing conservatives do about their First Amendment rights, they have been shockingly silent in the face of an actual First Amendment violation.

What Tulsa PD did to #SheilaBuck is disgusting and shows how badly American policing is dire need of being dismantled and rebuilt for a modern democratic society https://t.co/VwRmS2YxeH

A friend of #SheilaBuck says her bail is paid. Someone else is covering legal fees. I'm pissed this happened in the first place and I'm pissed that Trump is in town, but I'm reminded that there are good people in Tulsa pic.twitter.com/9gx3mTtlSA

This is absolutely disgusting and embarrassing. Our country has got to be better than this. The whole world is watching. #TulsaPD took an oath to defend our constitution, not violate the laws they promised to uphold. #TrumpsCoronavirusRally #SheilaBuck pic.twitter.com/BSSkVTslSW

Oklahoma Gov Kevin Stitt just went on national television YESTERDAY talking about how Oklahomans believe in the FREEDOM to wear what they want (when it comes to the public safety issue of not wearing masks).

Does that "freedom" not extend to Sheila Buck's tshirt, @GovStitt? https://t.co/beQXKHrudZ

Sheila Buck is well-known and well-respected in Tulsa and Oklahoma in general.

The Trump campaign, Tulsa Police, and Mayor Bynum fucked up by having her arrested on live television. https://t.co/Eun4utdLFY

She just said “Somebody has to do this.”

This ally’s name is Sheila.

In a world of Karen's, be a Sheila. #SheilaBuck