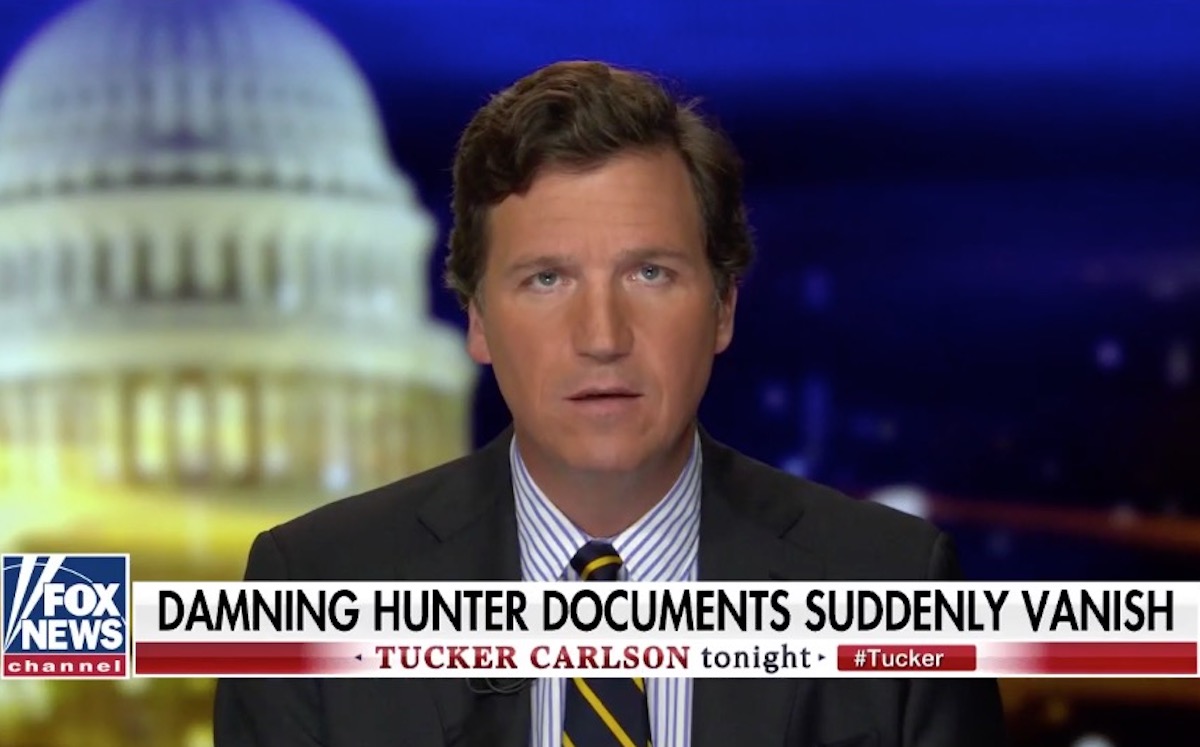 Republicans and right-wing media are still refusing to give up the idea that Hunter and Joe Biden are caught up in a Ukrainian corruption scandal. They’ve been pushing this story for a long time. Donald Trump literally got impeached over it. Everyone has looked into this, from news outlets to a Republican-led Senate investigation and no one has found any proof that Joe Biden did anything wrong.

And yet they won’t let it go. Earlier this month, the New York Post (which has endorsed Trump for reelection) published a ludicrous story claiming Rudy Giuliani found Hunter Biden’s laptop in a repair shop in Delaware and just happened to be full of incriminating emails. Absolutely no one found that story credible, not even the journalist whose byline appeared on it.

Now Tucker Carlson is getting in on the conspiracy theory action. On his Fox News show Wednesday, Carlson laid out one hell of a story.

“On Monday of this week, we received from a source a collection of confidential documents related to the Biden family,” Carlson told his audience. “We believe they are authentic, they’re real and they’re damning.”

At the time, Carlson was in Los Angeles to interview one of Hunter Biden’s former business associates, so he asked a producer in New York–where Rudy Giuliani or whoever this “source” is presumably dropped them off–to send them over, which Carlson says the producer did. He wouldn’t name the shipping company they used but alludes to it being FedEx or UPS. And that company, he says, lost the package. The package that would have taken down the entire Biden campaign. The package that definitely exists.

Carlson describes how when the alleged package allegedly arrived at a sorting facility, it had been opened and the contents were missing. He says there was a massive investigation that involved the shipping company interviewing “every one of its employees who touched the envelope we sent.”

“They searched the plane, and the trucks that carried it, they went through the office in New York where our producer dropped that package off, they combed the entire cavernous sorting facility, they used pictures of what we had sent, so that searchers would know what to look for.”

“They went far and beyond, but they found nothing. Those documents have vanished,” he said. “As of tonight, the company has no idea and no working theory either about what happened to this trove of materials, documents that are directly relevant to the presidential campaign just six days from now.”

LOL Tucker wants his viewers to believe the super damning Hunter Biden info he had just disappeared without a trace.

I get that what Tuck is “baffled and deeply bothered by” is the idea that someone would do this in the first place (if we’re choosing to believe they did), but he also makes it sound like this has completely derailed their ability to release the information in those allegedly real documents, which makes no sense! Did no one at Fox News make a copy of those documents before sending them across the country? He said himself that they had pictures of what they sent so … maybe just use those?

So Tucker Carlson’s producer didn’t read and summarize the documents before mailing them? He/she didn’t scan, fax or copy them? The thief managed to infiltrate Fox’s mail room? There’s no security video or visitor log? The person who sent it originally doesn’t have another copy? https://t.co/9yKkDAUh2v pic.twitter.com/Qe2QDXAqt9

The only way that any of this actually makes sense is when you remember that a judge recently ruled that Tucker Carlson doesn’t have to tell the truth on his show because no one actually thinks he’s a real journalist in the first place. If you view this as performance art, well, it’s still actually pretty pointless and ridiculous. But it’s better than pretending it’s news.

The thing that absolutely sells that Tucker bit is that he plays it *entirely* straight and doesn’t break even for a milisecond. Absolute art.