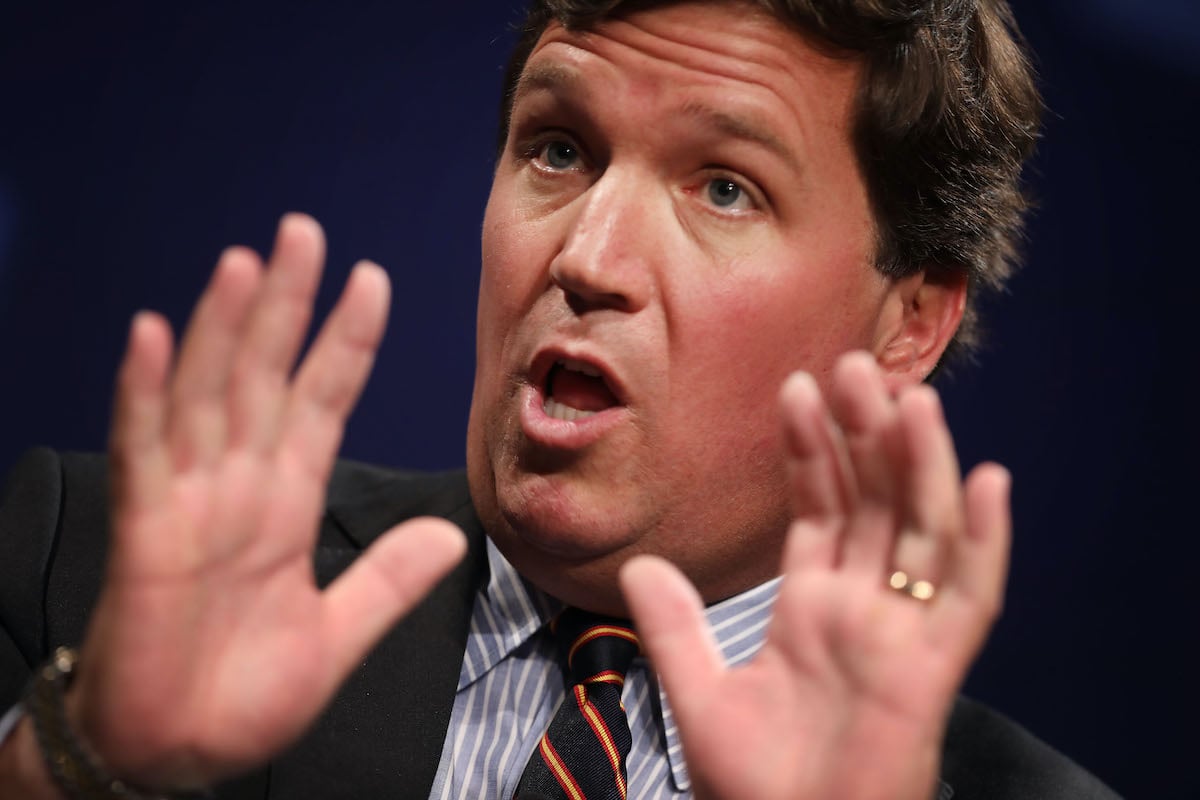 Fox News is in court this week, thanks to a slander lawsuit brought by Karen McDougal, the former Playboy model who received $150,000 from the National Enquirer to stay quiet about an alleged affair with Donald Trump.

McDougal says Tucker Carlson defamed her in a segment on her Stormy Daniels, who also claims to have had an affair with Trump.

“Two women approached Donald Trump and threatened to ruin his career and humiliate his family if he doesn’t give them money,” Carlson said in December of 2018. (He didn’t mention McDougal by name but showed her picture onscreen.) He told his viewers that the facts of the case were “undisputed” while recounting the “gist” of a New York Times story.

“Now that sounds like a classic case of extortion,” Carlson told his viewers.

Now Fox News is having to argue that when he said that, Carlson wasn’t really accusing McDougal of committing a crime. And the best defense they can come up with is that Carlson has no obligation to investigate the claims he makes or relay actual facts to his viewers, and that those viewers understand those things when they tune into his show.

Fox News’ official position – IN FEDERAL COURT – is that Tucker Carlson lies on air and his viewers know it. https://t.co/QU4rj5MpRD

Under New York law, for Carlson’s words to be defamatory, his viewers would have to believe he meant them. And despite calling the facts he was relaying “undisputed,” despite presenting himself as a journalist on a network with “news” in its name, Fox News’s lawyers are arguing that no one believes Carlson is telling the straight truth.

“What we’re talking about here, it’s not the front page of The New York Times,” said the network’s lawyer, Erin Murphy. “It’s Tucker Carlson Tonight, which is a commentary show.”

Hmm, that’s funny because Tucker Carlson loves to accuse the Times of being an unreliable news source. I guess that’s just another thing his viewers were meant to know was false all along.

This is reminiscent of fellow far-right “news” host Alex Jones, who has had to defend his monstrous lies about the Sandy Hook shooting in court. He has argued before that he’s a “performance artist” basically playing the character of a rightwing conspiracy theorist, as if that nullifies the damage done both to those who he attacks and those who take him at his word and absorb his lies as gospel, as so many Fox News viewers do.

Despite recently surpassing Sean Hannity as having the most-watched show on Fox News, Tucker Carlson has been losing advertisers as his comments about Black Lives Matter protests have become increasingly inflammatory. It’s not the first time his racism has sparked an advertising exodus and I’m guessing it won’t be the last. I would imagine there’s a shrinking number of companies that want to be associated with racist fearmongering masquerading as news (when it’s convenient).