TSA Considers Complaining About TSA a Sign of Potential Terrorism 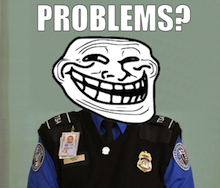 First: The TSA has a very, very difficult job, balancing public security with the need for convenience and relative speed in nationwide travel. (The degree to which they are doing that job well is of course a matter of furious public debate right now.) And no authority figure likes to see their authority mocked or questioned.

Be that as it may: According to a CNN special report, one of the TSA’s behavioral indicators for “high-risk” passengers is complaining about or questioning airport security procedures. Being marked as “high-risk” generally leads to additional screening and delays. First Amendment advocacy groups have a problem with all of this.

“Expressing your contempt about airport procedures — that’s a First Amendment-protected right,” said Michael German, a former FBI agent who now works as legal counsel for the American Civil Liberties Union. “We all have the right to express our views, and particularly in a situation where the government is demanding the ability to search you.”

“It’s circular reasoning where, you know, I’m going to ask someone to surrender their rights; if they refuse, that’s evidence that I need to take their rights away from them. And it’s simply inappropriate,” he said.

Moreover, there’s evidence that actual terrorists would steer clear of complaining about the TSA: According to a captured al Qaeda training manual, recruits are instructed to “blend in” and go out of their ways not to make a scene.