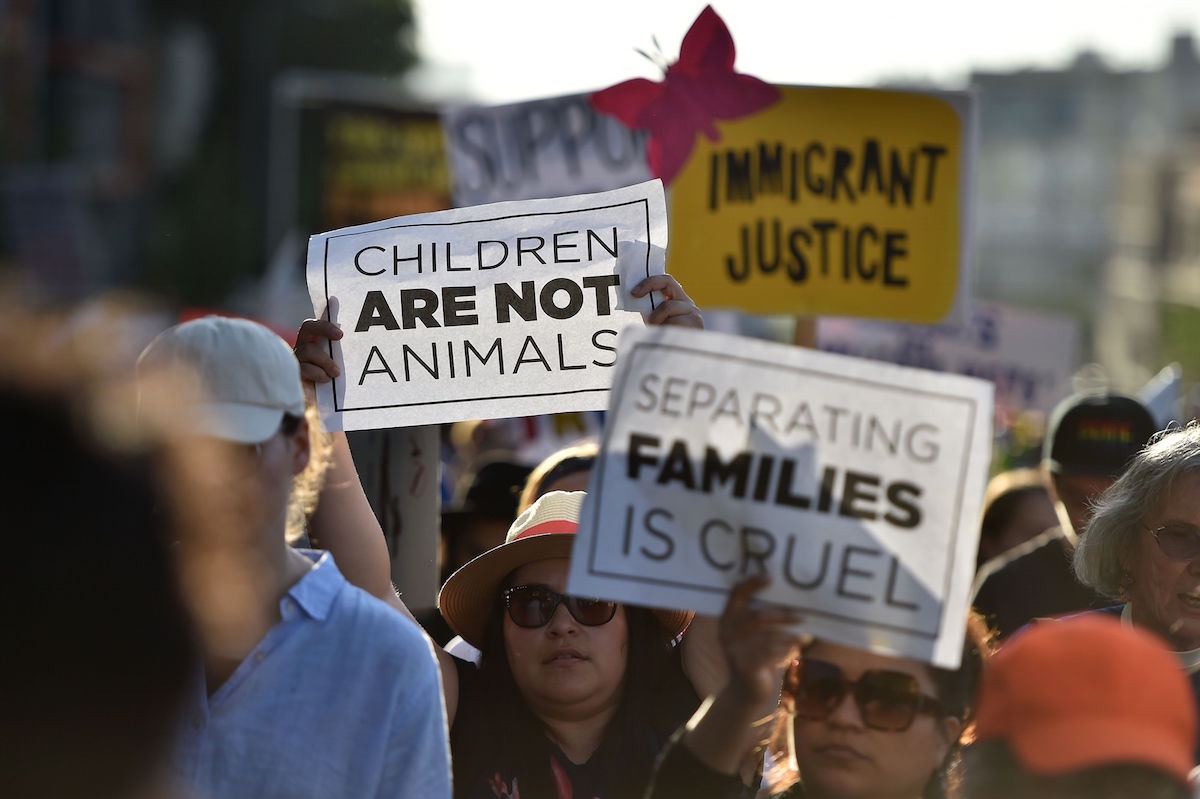 As Donald Trump’s horrific “zero-tolerance” policy of separating children from their parents at the U.S. border gets more and more attention, Trump and his team have tried to find ways to convince the public that this isn’t as bad as it definitely is. Homeland Security’s Kirstjen Nielsen has denied that such a policy exists, but also claimed that the nonexistent policy isn’t that bad because the children are “very well taken care of.” Jeff Sessions has said that parents can get their children back when Trump gets his wall, yet we’re apparently not supposed to see that as the terms of a hostage negotiation.

There’s a lot to sort through with regard to what’s happening at the border. It can be overwhelming to navigate all the lies being told in an attempt to deflect the growing negative attention. So let’s focus on the biggest ones.

Lie: This is the Democrats’ fault.

This is the biggest and weirdest lie being told about the current events happening at these border facilities. Donald Trump has taken to blaming the Democrats for the laws dictating children be taken from their parents at the “boarder.”

It is the Democrats fault for being weak and ineffective with Boarder Security and Crime. Tell them to start thinking about the people devastated by Crime coming from illegal immigration. Change the laws!

Setting aside the fact that Republicans control every branch of government so if they wanted to change the laws, they absolutely could, Trump’s argument is just plain false because there are no laws requiring children be separated from their parents. This is the result of a policy decision announced by Jeff Sessions, implemented under Trump.

Kellyanne Conway tried to shame Democrats for not bringing up the policy of separating families during their big immigration meeting with Trump back in January, which, as Chuck Todd forced her to admit, was likely because that policy did not yet exist.

Yes, there were terrible abuses perpetrated by border patrol agents under Obama as well. But he openly fought with border patrol while aggressively pushing for deportation relief. Some also point to reports that numbers of ICE arrests were higher under President Obama than under Trump, but that ignores the differences in who is being targeted and how they’re being treated. Trump’s ICE is going after long-time residents and even legal immigrants, targeting immigrants in vulnerable situations, including hospital patients and women seeking protection from domestic abuse.

Not to mention, if you see videos of children being kept in cages after being separated from their families, and your only response is “well, this is nothing new,” I don’t even know how to address the total lack of decency that displays. Which brings us to …

So from what I’ve seen, border patrol isn’t actually saying the children separated from their parents weren’t being kept in cages. Rather, they’ve said that is accurate, but they’d prefer we don’t use that term. It makes them “uncomfortable.” So it’s less a lie than semantic bullshitting.

This just in from @davidbegnaud: Border Patrol has reached out to @cbsthismorning and said they are “very uncomfortable” with the use of the word cages. They say it’s not inaccurate and added that they may be cages but people are not being treated like animals. pic.twitter.com/0zSDqJszgK

Here’s an idea: If border patrol is uncomfortable at the thought of keeping children in cages, they do have the option to not keep children in what are most definitely cages.

This is US government video. pic.twitter.com/kOdp5XzuEx

They also have the option to treat those children with compassion.

AP story: officials scolded “a group of 5-year-olds for playing around in their cage, telling them to settle down. There are no toys or books.” One boy was “quiet, clutching a piece of paper that was a photocopy of his mother’s ID card”
“IN THEIR CAGE” https://t.co/P3gUId1EVD

Lie: This is a normal response to criminal activity.

We’ll get to the actual legal aspect in a second, but first of all, no it isn’t. The decision to use the separation of families as a weapon with which to deter immigrants from entering the county is cruel and obscene and likely to instill lasting trauma in the children being affected. How do we know it’s being used as a deliberate deterrent and not an unfortunate after-effect? Because Jeff Sessions said so. So did John Kelly.

It would also be a lot easier to believe these policies were anything short of total evil if there weren’t so many private contractors treating the business of taking children from their parents as such a lucrative industry.

The Trump administration thought that separating families would lower immigration rates. It hasn’t. They also thought they could convince Americans that immigration is synonymous with crime, but they can’t even Google basic statistics.

Lie: These immigrants are criminals and therefore need to be arrested.

Seeking asylum is a legal act. The DHS has denied that those being arrested and separated are asylum seekers, but various accounts say otherwise. Additionally, Jeff Sessions has expressed an assumption that claims of asylum are false, created by “dirty immigration lawyers.” He also eliminated protections for those seeking asylum for domestic violence and gang violence, stating, “We are really returning to the classical understanding of what asylum is.”

There have also been reports of asylum seekers being turned away or separated from their families at legal points of entry, leading many to choose to enter between those ports, which is illegal.

Seeking asylum is not a crime, but even if people cross the border illegally, it’s a misdemeanor. So unless you want to start taking children of people charged with reckless driving, discharging a firearm in city limits, or public intoxication- stop saying immigrants deserve this

So Jeff Sessions, the DHS, and border patrol have set a system wherein those seeking legal asylum are deterred from entering the country legally, leading them to enter outside the established points of entry, giving the appearance of supporting the stated argument that those being arrested and separated from their families weren’t seeking legal asylum in the first place.