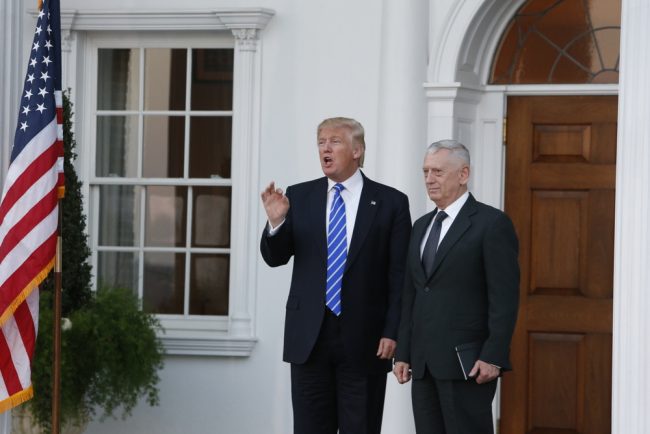 Keeping to his campaign platform of enshrining as much bigotry as possible in U.S. law, Trump has signed his promised ban on transgender people serving in the military, which you can read in full here. The policy memo seems limited to the “accession,” or recruitment, of openly trans service members, and it leaves the question of active-duty trans people to Secretary of Defense James Mattis – but it also includes a ban on Department of Defense (DoD) funding for gender-reassignment surgery.

Warning: the language of the memo has some nasty transphobic undertones, so I’d skip it if you’re not in the right place for that today.

According to this memo, which you can read in full here, the Obama administration failed to prove that admitting trans service members “would not hinder military effectiveness and lethality, disrupt unit cohesion, or tax military resources, and there remain meaningful concerns that further study is needed.”

The whole idea that trans people are somehow fundamentally unfit to undertake the sort of duties that it’s a-okay for convicted felons to perform is…bigotry, plain and simple. It suggests that there’s something fundamentally off, or burdensome, about trans folks which makes them a threat to “effectiveness,” “unit cohesion,” and “military resources.” Trump believes that “further study” is required to prove that trans people are not a burden – but you’ll notice he has no evidence that they are. Bigotry, according to this memo, is common sense; the idea that trans people are people, though…that one’s going to need “further study.”

Perhaps most disgustingly, this memo prevents the military from funding gender-reassignment surgeries for enlisted members, ordering the military to “halt all use of DoD or DHS resources to fund sex-reassignment surgical procedures for military personnel.” The only exception is when such surgery would be “necessary to protect the health of an individual who has already begun a course of treatment to reassign his or her sex.”

You might think all those “patriotic” Republicans would be appalled at the idea of arbitrarily denying medical care to active-duty soldiers, but as with the military’s callous treatment of rape victims and persistent racial discrimination, it seems their “respect our troops” rhetoric only applies to those troops who are cis white men.

Trump, as we all know, is an incorrigible monster, but pressure should mount on Secretary of Defense Mattis, who at least seems to care about his public image. This memo leaves the door open for him to push back against Trump’s discriminatory policy. The memo states, “The Secretary of Defense, after consulting with the Secretary of Homeland Security, may advise me at any time, in writing, that a change to this policy is warranted.” Mattis also has until Feb. 21, 2018, to propose a plan for implementing this ban on new recruits and for determining how to treat trans people who are currently serving their country.

Write to Trump that this policy is wrong now, Mattis.

If you’re a trans service member who will be affected by this policy, Lambda Legal wants to hear from you. Lambda Legal has also already promised to take Trump to court over the ban, as has the ACLU, in case you were wondering where you could send some money to help fight this monstrosity.

Hey @realDonaldTrump, expect to get to know us even better VERY soon. See you in court. https://t.co/Cxpd6LaHmF

I’m unclear how this will apply to trans veterans, many of whom get their healthcare through the Department of Veterans Affairs (VA). The VA doesn’t fall under the Department of Defense budget, so it seems to be exempt from this policy, but I don’t know if that will still be the case once the “implementation plan” is released.

At least some GOP congresspeople have spoken out against this hate-filled policy, including Senator John McCain (R-AZ), but honestly Senator Tammy Duckworth (D-IL) has the definitive response:

When I was bleeding to death in my Black Hawk, I didn’t care if the troops saving me were gay, straight, transgender, black, white or brown pic.twitter.com/FTzjHpZuuH

And Senator Kirsten Gillibrand (D-NY), a member of the Senate Armed Forces Committee, has the definitive next move. We’ll see if McCain supports it.

To all trans men and women serving bravely in the military: I plan to introduce legislation to fight back. We’ll keep raising our voices. https://t.co/kvKLXe1aN4

The basic humanity of trans people is not an untested hypothesis that requires “further study.” It’s a reality – one that the Trump administration refuses to acknowledge.

(Via TIME and Politico; image via Shutterstock)