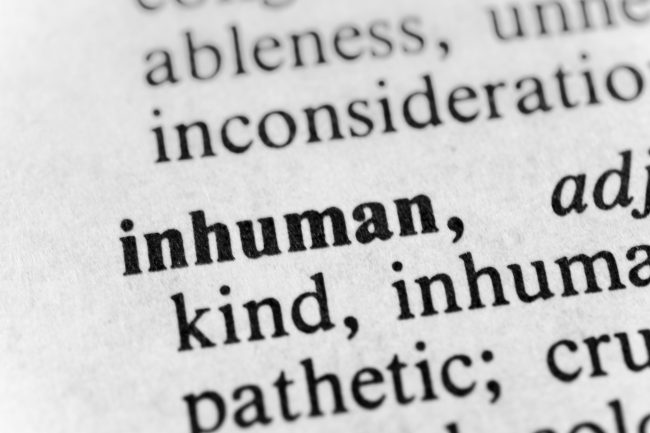 It’s a popular refrain among conservatives: Cut government spending! One would think, however, that in order to really cut a bulk of government spending — like, if that’s really the thing that matters to you — you’d aim for where the most money is being spent. Like, oh I don’t know, the United States military budget (54% of federal discretionary spending, a total of $598.5 billion). This way, you wouldn’t have to cut something entirely. Just, you know, trim it. Instead, Trump’s budget plan is set to cut entirely the parts of the budget where basic humanity lives. Because that’s how he rolls.

Washington D.C. newspaper The Hill revealed Trump’s budget plan earlier today, a plan that Trump didn’t talk about the entire time he was running for President (I mean, who needs to talk about actual plans and ideas when you have snappy slogans!), which “hew[s] closely to a blueprint published last year by the conservative Heritage Foundation, a think tank that has helped staff the Trump transition.” And this plan is gonna save us so much money, you guys! Except it’s going to do so by cutting things that actually matter in terms of, you know, being a human person with a soul.

Hey, you know all that art you love? Those plays, books, films, TV shows, and art exhibits that challenge you and make you think? Well, in Trump’s America, concepts like “being challenged” and “thinking” are a thing of the past. The National Endowment of the Arts, which according to the Washington Post only accounts for .003% of total federal spending, is getting eliminated entirely. Like, all of it. Like no more grants to artists or arts organizations ever. But, considering his attitude toward artists and how they daren’t criticize anyone in power lest they be deemed “rude,” we shouldn’t be surprised:

The Theater must always be a safe and special place.The cast of Hamilton was very rude last night to a very good man, Mike Pence. Apologize!

So it’s now official government policy now not to give a shit about the arts — A.K.A. the people who generally speak truth to power in creative ways that the average person might pay attention to — great. Couple that with Trump’s ongoing campaign against the press, and it’s now official government policy to shut up anyone who might have anything negative to say about our government, despite the fact that Freedom of Speech and the Press is something that’s supposed to be protected by our government according to the Constitution. Isn’t freedom awesome? What else have you got, Trump?

So, in case there was any doubt in your mind that Trump doesn’t give a shit about women or people of color, other big cuts include entirely removing the office dealing with Violence Against Women. WHAT KIND OF VOLDEMORT DOES THAT?

Other DOJ cuts include the complete elimination of the Office of Community Oriented Policing Services (because who needs to solve problems like police brutality nationwide?) and the Legal Services Corporation, as well as reducing funding for its Civil Rights and its Environment and Natural Resources divisions. Well, at least Civil Rights resources and environmental resources aren’t being cut entirely, just reduced. See? He does care!

Oh wait…maybe he doesn’t care about the environment as much as all that:

Because coming up with energy alternatives and ways to reduce carbon dioxide emissions is such a waste of time! Who needs that?

Trump’s attitude about things like the arts, women, people of color, and the environment were perfectly summed up in a statement by Brian Darling, a former aide to Kentucky senator Rand Paul and former Heritage Foundation staffer. He says, “The Trump Administration needs to reform and cut spending dramatically, and targeting waste like the National Endowment for the Arts and National Endowment for the Humanities would be a good first step in showing that the Trump Administration is serious about radically reforming the federal budget.”

Well there you go, folks! The arts and Humanity are considered wastes. Taking care of people and supporting not only their constitutional right to express themselves, but the kind of innovation and creativity that actually could “Make America Great” is a waste. This is our soon-to-be-president, Ladies and Gentlemen!

Now, this is all Discretionary Spending, and not Mandatory Spending, which is the part of the government budget that includes things like Social Security and Medicaid, and is where a majority of government funds are spent. There’s no word yet on what cuts will be happening on that side of things. However, I find it very interesting that on the discretionary side, the thing that there’s no mention of touching at all is military spending. Never mind that our military has been stuck fighting in wars it should never have been put into in the first place (because I support the troops, and part of supporting the troops is recognizing when the troops are being sacrificed unnecessarily). Never mind that the military spending is the stuff most likely connected to the corporations that financially support conservative candidates in exchange for political pull and favors and government contracts.

Never mind all that, Citizens of Trump’s America! Because we apparently have a bigger war to wage! Against…artists, and women, and people of color, and, um, trees.

And it’s only just begun.

(via Deadline Hollywood, image via Shutterstock)