Trump's Slogans Continue to Miss the Point | The Mary Sue

From Sinatra to The Purge, Trump’s Slogans Continue to Miss the Point

Not much for nuance, is he? 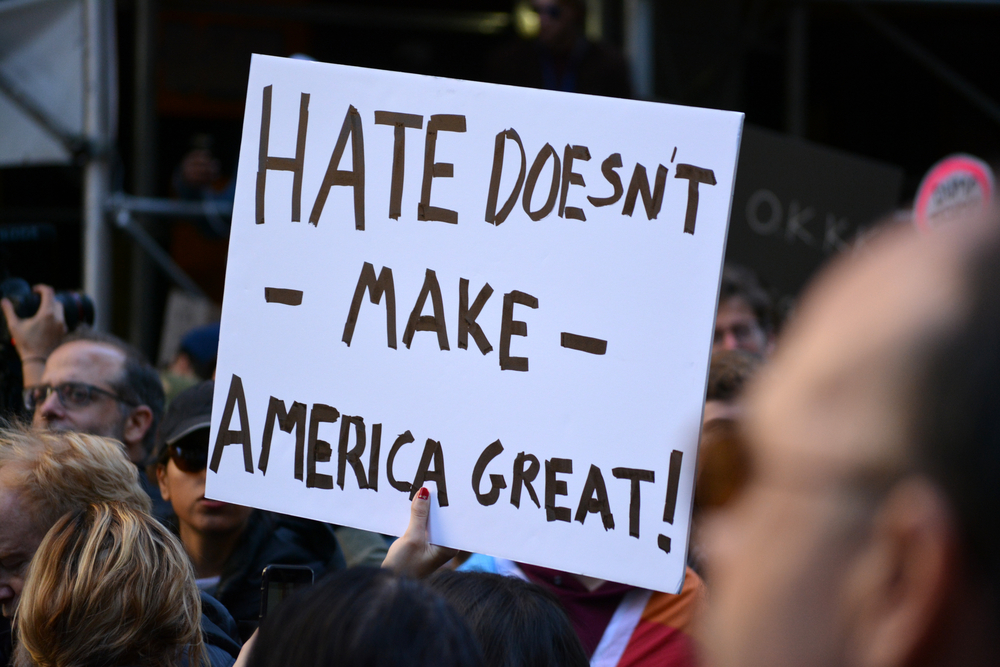 Take, for example, his campaign slogan “Make America Great Again.” With those words, he was able to tap into all the anger and fear that his (overwhelmingly white) supporters felt after eight years of watching diverse communities finally begin to gain rights and respect they’d previously been denied, and convince them that he would put an end to that. It’s a horrible lie of a slogan—begging tons of questions, like “When exactly was America great?” “When did it stop being great?” “For whom is America about to get better?”—and that’s exactly why it worked.

But if Trump ran on the idea of Making America Great Again, what’s going to happen in four years? (That’s assuming he does, in fact, run for reelection rather than suffering a breakdown after a few days of taking on what is possibly the most stressful job imaginable without a full or qualified team in place to support him.)

Well, he answered that question, and he did so as a non sequitur during a Washington Post interview.

Halfway through his interview with The Washington Post, Trump shared a bit of news: He already has decided on his slogan for a reelection bid in 2020.

“Are you ready?” he said. “ ‘Keep America Great,’ exclamation point.”

“Get me my lawyer!” the president-elect shouted.

“Got it,” the lawyer replied.

Okay, not quite as punchy as the original, but fine. It gets the message across: “We’re in power and we’re going to stay in power.” But does it sound familiar? Yes. Yes it does.

Yup, “Keep America Great” is the tagline from The Purge: Election Year. I can’t tell if this is Trump missing the point of how dangerous and oppressive his words come across, or knowingly leaning into the terror.

Instinct says it’s the latter, but if it’s the former, it wouldn’t be the first time Trump loved a catchphrase without realizing the subversive subtext underneath. Just look at that all-too-effective original slogan. “Make America Great Again” isn’t exactly a Trump original. It’s blatantly reminiscent of the Langston Hughes poem, “Let America Be America Again.”

The glaring difference comes in the next line, though:

(America never was America to me.)

Trump is the kind of man who can talk about returning to a time of past unequivocal greatness with no hint of irony. That is a very specific kind of man.

And even now, in looking to this weekend’s inauguration, Trump continues to completely miss the point of the messages he’s adopting. His “first dance” at the inaugural ball will be to Frank Sinatra’s “My Way.” Nancy Sinatra made it clear a few weeks ago that she does not believe her father would have accepted an invitation to perform at the event, were he still living. As she put it, “he would never support a bigot.”

But when a fan asked if she was upset over the use of the song, she responded perfectly:

Just remember the first line of the song. https://t.co/dYrXv818i9

That line, if you’re not familiar, is “And now, the end is near.” Fitting, no?

Nancy has made it clear that this was just a joke, but it does highlight Trump’s boundless lack of nuance. He considers himself a rogue, and outsider, who won the election by doing things his way, not Washington’s way.

To most of us, though, Washington wasn’t his opposition, it was anyone who wasn’t an entitled, opportunistic billionaire. And when a man with those values rises to power by doing things “his way,” with no regard for the well-being of anyone else, well, how far can the end be?

Imagine what it must be like to live in a world where everything only has one layer of meaning? It honestly sounds like a dream. A sweet, simple, superficial dream.