You're more clever than that. I believe in you. 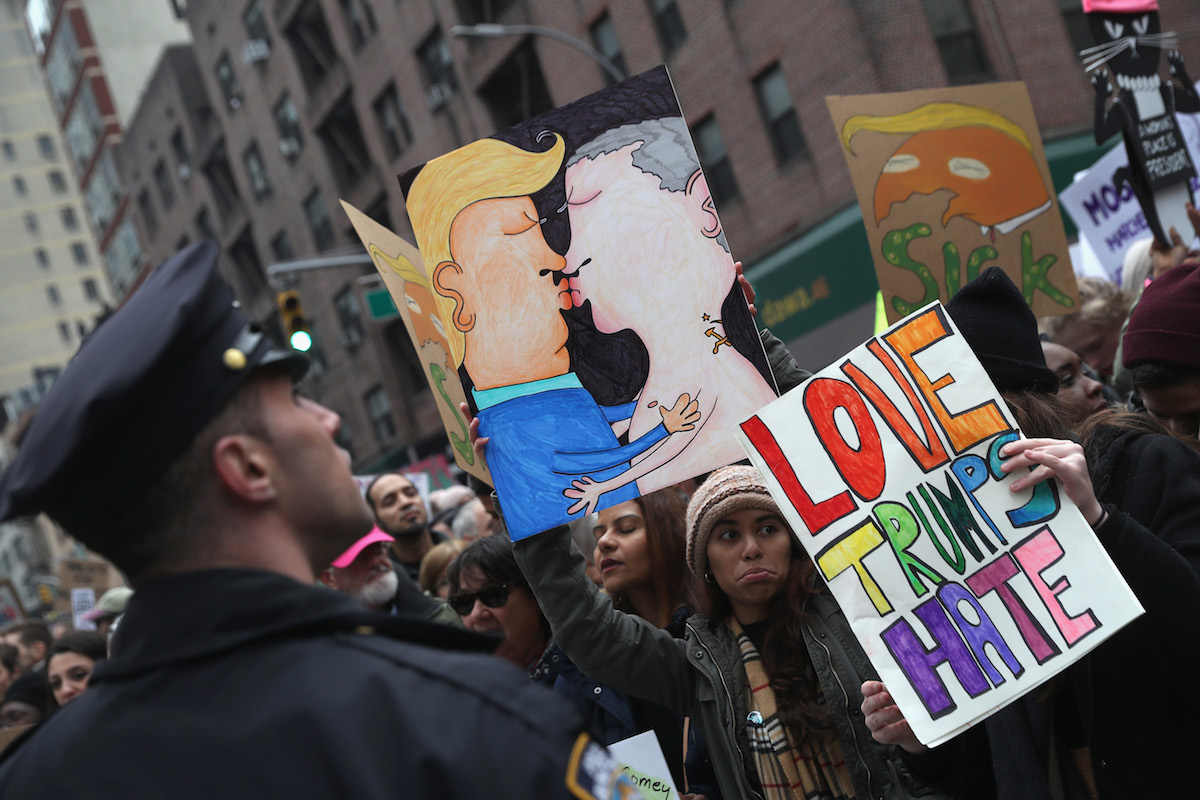 Pres. Trump, on tariffs: “It’s all working out. Just remember: what you’re seeing and what you’re reading is not what’s happening.” pic.twitter.com/kW0slkybHA

I’m currently sitting in front of my computer, and haven’t yet joined the protestors gathered downtown. But scrolling through the pictures being posted to multiple resistance-based Facebook groups, I’m heartened by how many people have taken time off from work or made other sacrifices come out and protest this administration. I’m also saddened, though, by a trend that I’d hoped would have disappeared by now, yet continues to go strong: homophobic protest signs.

These signs have appeared at protests all over the world: images of Donald Trump and Vladimir Putin in sexual or romantic poses, the implication being that these two are so close, they’re practically in love. Or that Trump is so submissive to Putin politically, one can find humor in imagining him submissive sexually. These images aren’t limited to protests, either. Earlier this month, the New York Times released an animated video about a romance between the two.

In this episode of Trump Bites, Donald Trump’s not-so-secret admiration for Vladimir Putin plays out in a teenager’s bedroom, where the fantasies of this forbidden romance come to life. https://t.co/h5gpVJzj69 pic.twitter.com/f4aBEOfRYt

Plenty of people will insist that these images are just a joke or that their purpose is to embarrass the two presidents, both of whom have a negative view of homosexuality. In an insightful piece over at The Guardian, transgender writer Lee Hurley writes,  “It’s too easy to say, ‘it’s a just a joke’. In one online debate, I saw a seemingly intelligent person argue that they’d rather worry about people dying than ‘hurt feelings’, as if homophobia had never killed a single person. What’s even worse is that queer people are saying it’s offensive yet are being told we just don’t get it, as if we’re new to homophobia. Words matter and when you’ve grown up fearing abuse every day of your life, it’s hard to see what there is to chuckle about here. If you haven’t, it can be a struggle to grasp that concept.”

These signs and these “jokes” don’t hurt Trump and Putin. They do hurt people, especially young people, who are actually gay or queer. Because you cannot deride homosexuality without deriding gay people, even if the jokes are meant to be at the expense of someone’s ego. They still reinforce the idea that there is something funny about same-sex attraction.

That idea is especially pervasive when it comes to male same-sex relationships, perpetuating the idea that homosexuality undermines a person’s masculinity. Again, even if the point is ostensibly to mock men like Trump and Putin for having those views, the mockery still reinforces the bigotry. You cannot laugh at the idea of two specific men being gay without reinforcing the idea that there is something laughable about being gay itself.

As with the fat shaming that many Trump detractors have relied on, the homophobic protest signs are lazy forms of mockery at best and, at worst, cause real damage to innocent people whose identities are being used as the punchline to your joke.

There is a lot about Trump and his sycophantic, possibly treasonous relationship with Vladimir Putin that is worthy of condemnation and that invites mockery. You don’t have to sink to homophobia for that.