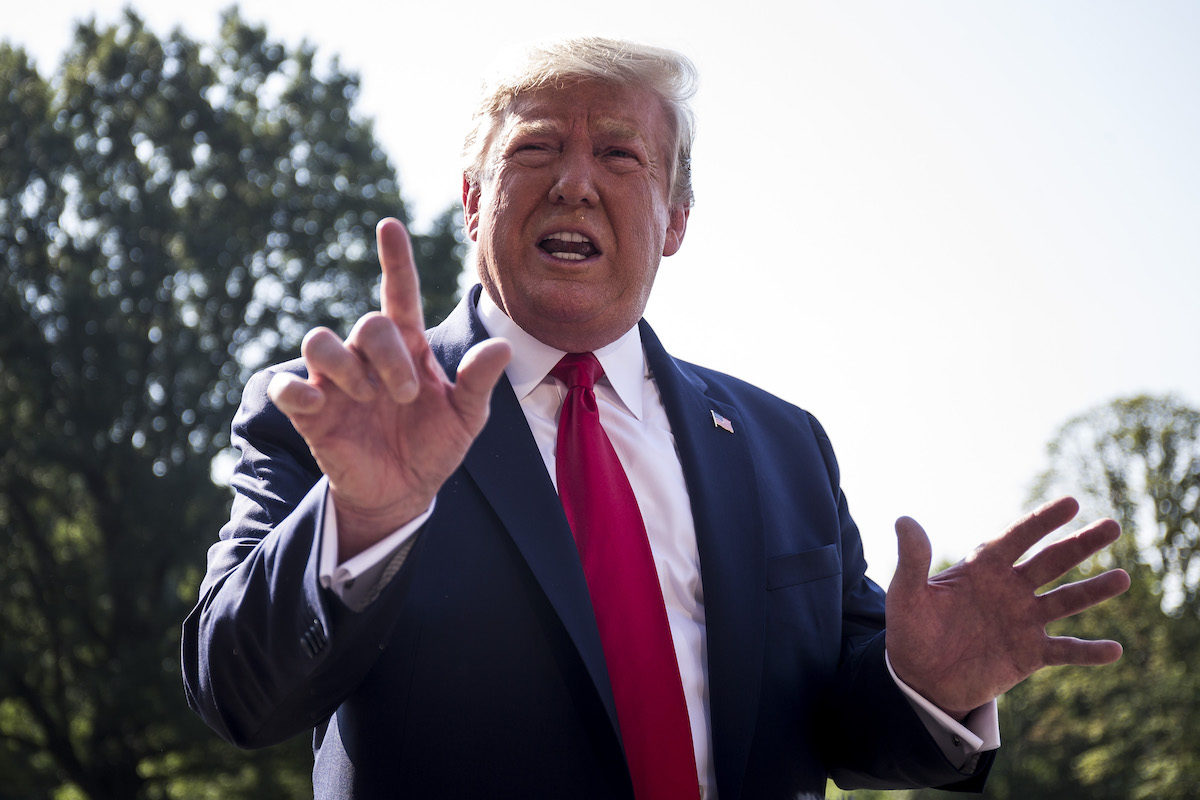 After the horrific shootings in Dayton, Ohio and El Paso, Texas this weekend, Donald Trump gave a terrible speech in which he said one fairly good thing. He finally condemned the “sinister ideologies” of “racism, bigotry, and white supremacy.” He wasn’t exactly convincing, and his own actions and language consistently undermines this message, but it was still way better than his “very fine people on both sides” comment after Charlottesville.

Unfortunately, that unequivocal (again, if unconvincing) condemnation didn’t last long. When leaving the White House Wednesday, on his way to visit survivors in Dayton and El Paso, he told reporters that he is “concerned about the rise of any group of hate.”

Yup, once again, he puts white supremacists and the counter-protesters fighting white supremacy on the same level. He does this despite the fact that one group commits violent acts, including mass violence, in order to push their white supremacist ideologies, and the other group is literally just there to stop them. And while they may not be peaceful, they are not dangerous to anyone but actual, active fascists. And even then, their goals and their methods in no way mirror the deadly violence of white supremacists.

-30 years of antifascist activity in the US: 1 confirmed fatality (a nazi who was shot during an altercation in 1993).

We knew Trump’s condemnations of white supremacy weren’t sincere. But honestly, I thought he could have held out longer before backtracking this far. That was naive of me.

Trump’s visits to these cities were, by most accounts, a disaster. First of all, he wouldn’t allow any independent journalists to follow him, instead choosing to release a propaganda video before the trip was even over.

My time spent in Dayton and El Paso with some of the greatest people on earth. Thank you for a job well done! pic.twitter.com/TNVDGhxOpo

You know how so many Republicans always yell about not politicizing tragedy when we try to talk about gun control legislation after a mass shooting? I wonder what those people think of Trump essentially releasing a campaign ad from the hospital.

The first thing Trump did after leaving Dayton on his way to El Paso was to attack the city’s leaders.

….misrepresenting what took place inside of the hospital. Their news conference after I left for El Paso was a fraud. It bore no resemblance to what took place with those incredible people that I was so lucky to meet and spend time with. They were all amazing!o

This is especially weird because that press conference was complimentary towards Trump. This is what Senator Sherrod Brown said: “He was received well by the patients, as you’d expect. They’re hurting … He was comforting. He did the right things and Melania did the right things. And it’s his job in part to comfort people. I’m glad he did it in those hospital rooms.”

I mean, that’s really the bare minimum you can say about a person and have it be considered positive, but that’s what he said.

When Trump got to El Paso, he used his time in the hospital to attack Beto O’Rourke, as he had earlier that day on Twitter. Talking about the last time he was in the city, he compared the size of the crowd at his rally to that of “crazy Beto.” He also managed to sneak in a reference to election night, 2016 and how the media “won’t believe” Trump has supporters, and that “they only believe it … on the day of the vote, they say ‘what happened?'”

This is viewer video of President @realDonaldTrump and @FLOTUS at @umcelpaso meeting with victims and medical staff. Send us any photos/videos of president Trump’s visit to #ElPaso and we may show it on TV. Upload here: https://t.co/UHa4MdGOH4 pic.twitter.com/DD5otJtYEg

Maybe he was feeling sensitive after seeing the large crowds of protestors in both cities–”protests of unusual size for a presidential visit at a time of collective grief,” according to the New York Times. Also, according to the Washington Post, a number of survivors wouldn’t meet with Trump, which isn’t surprising. After surviving a domestic terrorism attack, do most people really want to hear about the size of Trump’s rally crowd from three months ago?

i hate saying positive things about bush but even that dumb, incompetent, dishonest, warmongering torturer knew how to go to a hospital.