What the Hell Did I Just Watch?

No, really. What was that? 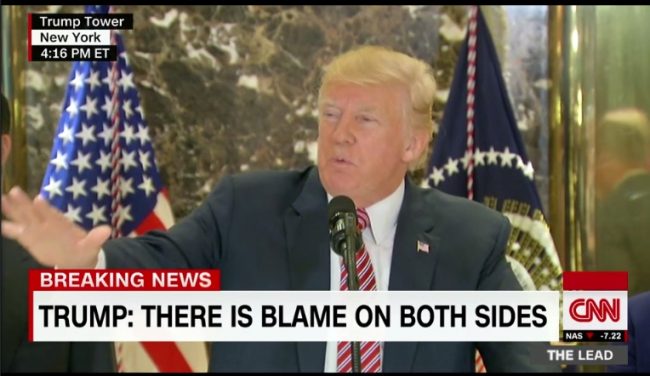 As the country still reels from the events of Charlottesville, Donald Trump apparently thought this would be a good time to make an announcement of a new executive order designed to make people build skyscrapers faster or something. To be honest, I didn’t really care what he had to say about infrastructure. I don’t think anyone did. Because as soon as he said he would take questions–which, by the way, he did not from the White House, but from what appears to be the lobby at Trump Tower.

The first time the presidential seal has been in Trump Tower pic.twitter.com/aOvwP7UQTy

When he opened the floor to questions, do you think anyone wanted to talk about infrastructure? No, of course not. And however unsettling his too-little, too-late comments were this weekend, this was so much worse. I’m still trying to wrap my mind around what I just saw because it was … a lot. Here’s the basic gist, though.

To start, Trump insists that his first statement on Charlottesville was “a fine statement,” and it was totally timely, not late or heel-dragging at all. Because as he explained, to the eternal tear-stained laughter of humans everywhere, “When I make a statement, I like to be correct. I want the facts.”

That has–possibly literally–never been the case. Pulling any one of all the innumerable examples out of an imaginary hat:

Trump said today he wants to "see the facts" before a statement. This was his tweet night of London Bridge attack: https://t.co/pQb6CNuChp

We need to be smart, vigilant and tough. We need the courts to give us back our rights. We need the Travel Ban as an extra level of safety!

So Trump, who is nothing if he’s not humble (spoiler: he’s nothing), said the actual words “Making the statement when I made it was excellent.”

Then he said the mother of the woman killed, Heather Heyer (who, he hears, “is a fantastic young woman” despite the fact that thanks to you, Donald Trump, you needed to use the fucking past tense there) wrote to him on Twitter and said “the nicest things” about him. He also said he hasn’t reached out to her. How very presidential.

Trump mentioned something Heather Heyer's mother said on Twitter but admitted he hasn't reached out to her personally. Yeah.

From there, he started attacking the “fake media” for not being so fact-driven like himself, who loves facts, has the best facts, there have never been better facts in all of history. He also talked about how all the new jobs he’s creating (yes, he started bragging about job creation again) will actually help race relations. Yes, he said those words.

And then things got … bad. Yes, I hear you saying “All that already sounded pretty bad.” I know. It did. But Trump hadn’t yet doubled down on his “many sides” bullshit.

After dancing around the definition of terrorism and spewing some garbage about Steve Bannon being “not a racist,” one reporter pointed out that John McCain has called the violence the fault of the alt-right. And since McCain is now on Trump’s shit list for, as he put it, “voting against Obamacare” (what do words mean, anyway?), Trump apparently thought that was a good line into some firm all-sidesing.

First, he tried to make the reporter define “alt-right.” Do you think he listened to an answer? Correct, he did not! Instead, he started rambling about the “alt-left,” and their fault in the violence.

Have you ever spent more than 10 minutes trying to articulate the meaning of Trump’s words? I don’t recommend it. So in an attempt to preserve just a tiny bit of my own sanity, I’ll let Politico’s transcribers show you exactly how Trump got from John McCain bitterness to “both sides are bad” to George Washington is basically a terrorist. Because it happened, but I definitely couldn’t explain the reasoning. 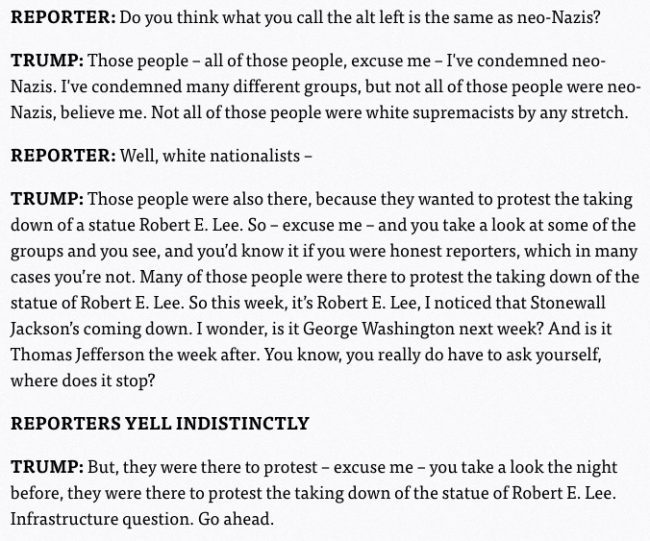 Do you think he got a question on infrastructure? No, he did not. Are you thinking to yourself “Wait, is he saying Robert E. Lee and George Washington are basically the same?” SO IS EVERYONE ELSE. 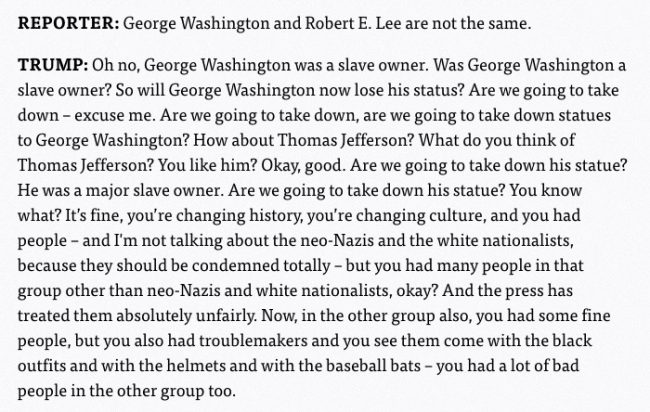 What better way to make sure you’re remembered as the Greatest President of All Time than to try to put everyone in the same category as the leader of the Confederacy, who at the same time you refuse to denounce? Flawless plan, right?

Trump's response to the death of an American citizen at the hands of a terrorist? I'm the victim. https://t.co/WOA4dbi2b2

Also, no one is more personally connected to this tragedy than he is.

He's bragging about the size of his winery in Charlottesville three days after a neo-Nazi terror attack there.

"I own actually one of the largest wineries in the United States; it's in Charlottesville." –substantive words of unity from the president

Oh, except that that is pure, unequivocal bullshit. For many reasons, but not least of which is:

That winery Trump bragged about owning? It has a notice on its website that is NOT owned by or affiliated w/ Trump. https://t.co/YU86rt18kl

If only we were surprised. We can be outraged at Trump, we can be angry. But is anyone still shocked? Trump let us know who he was a long, long time ago. He only continues to follow through with what he’s always shown us.

Monday was a script.
This is the real Trump.

This is a lot of things.

At this point, though, "surprising" is not one of them.

That is absolutely not an argument for complacency. But rather a reminder that we all need to keep paying attention. Because his nonsense words are hard to listen to. And I would bet he’s banking on that. Because there are a lot of people who are paying very close attention, really liking what they hear.

Because even when Donald Trump is trying to play the “both sides” game, this man is not smart enough to hide which team he plays for.

Interesting use of "us" (Trump referring to Nazi demonstrators) https://t.co/DSAZacRC9b pic.twitter.com/xdvusVeEt5