In the midst of a racial reckoning, Trump is straight up denying reality. 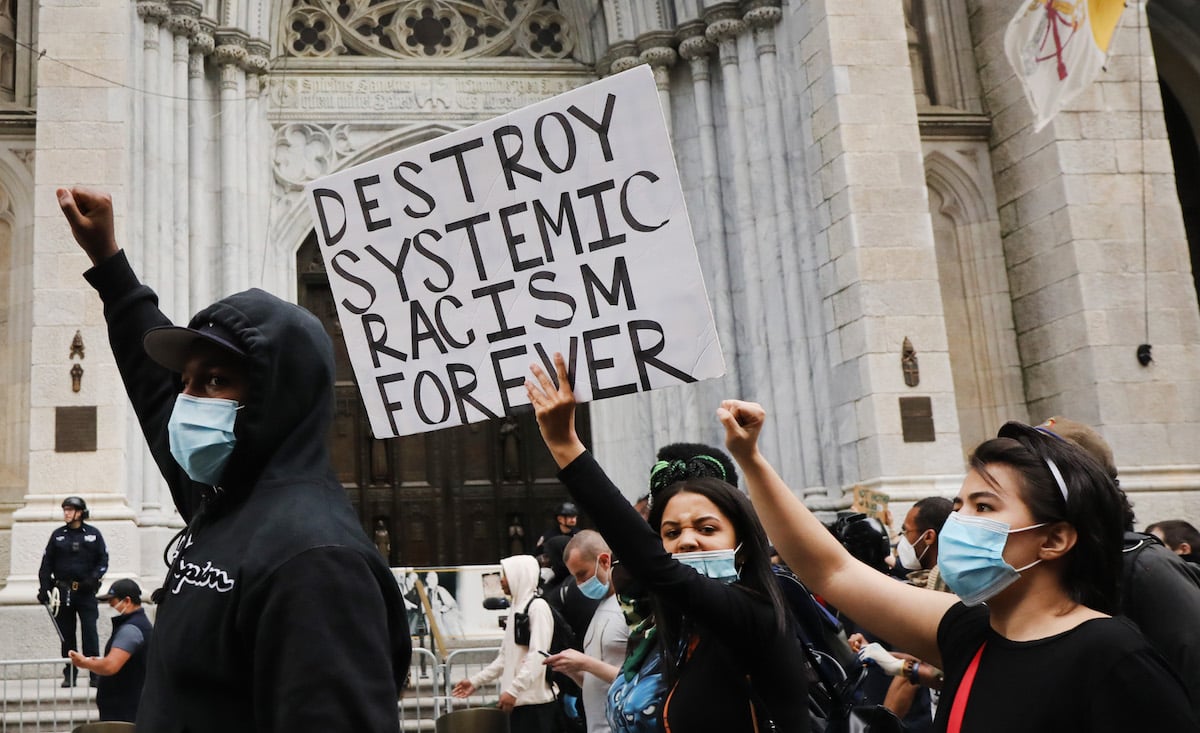 This morning, Donald Trump threatened to withhold funding from California’s schools if they use the New York Times’ “1619 Project” in their public school curriculum. Trump tweeted, “Department of Education is looking at this. If so, they will not be funded!” This comes immediately after the White House Office of Management and Budget issued an order to stop racial sensitivity and bias training across all federal agencies.

Of course, he can’t actually do it. It is illegal for the federal government to withhold money from schools for teaching a specific curriculum. But the message is clear: in the midst of a year marked by global racial justice protests, Trump and his camp have decided to pretend that racism simply doesn’t exist. And now, they are attempting to gaslight their voter base into supporting this lie.

For those unfamiliar, the “1619 Project” is a Pulitzer-Prize winning series from the New York Times which reframes American history around the date of August 1619, when the first slave ship arrived on America’s shores. It was first published in August of 2019, marking the 400th anniversary of the start of slavery in America. The collection of essays delves into the influence of slavery on the Black American experience, touching on systemic racism within the justice system, medical inequality, the wealth gap, and more. In discussing the aims of the article, the New York Times wrote,

“American history cannot be told truthfully without a clear vision of how inhuman and immoral the treatment of black Americans has been. By acknowledging this shameful history, by trying hard to understand its powerful influence on the present, perhaps we can prepare ourselves for a more just future. That is the hope of this project.”

But instead of reckoning with America’s original sin, Trump and his cronies have labeled the series as “un-American” and have tried to ban schools from incorporating the series into their curriculum. Arkansas Senator Tom Cotton has even proposed a bill, the Saving American History Act of 2020, which “would prohibit the use of federal funds to teach the 1619 Project by K-12 schools or school districts. Schools that teach the 1619 Project would also be ineligible for federal professional-development grants.”

Pulitzer Prize-winning journalist Nikole Hannah-Jones, who directed the “1619 Project”, tweeted in response, “This bill speaks to the power of journalism more than anything I’ve ever done in my career.” Today, she tweeted, “Do those concerns about cancel culture and McCarthyism and censorship only apply to the left or do they apply to the POTUS threatening to investigate schools for teaching American journalism? Silence is deafening here. #1619Project”.

Do those concerns about cancel culture and McCarthyism and censorship only apply to the left or do they apply to the POTUS threatening to investigate schools for teaching American journalism? Silence is deafening here. #1619Project https://t.co/rrRf8rLdZ0

California and vice presidential candidate Kamala Harris rebuked republican’s claims, saying in an interview with CNN, “I don’t think that most reasonable people who are paying attention to the facts would dispute that there are racial disparities and a system that has engaged in racism in terms of how the laws have been enforced, … It does us no good to deny that. Let’s just deal with it. Let’s be honest. These might be difficult conversations for some, but they’re not difficult conversations for leaders, not for real leaders.”

The difference between democrats and republicans couldn’t be clearer: one party is trying to reckon with America’s complicated history, while another is denying it entirely. Register to vote.