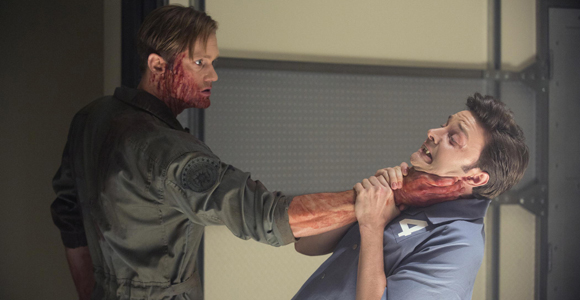 A big chunk of what I assumed would go down in the Season 6 finale wound up playing itself out in the penultimate episode. So…what now? That remains to be seen but last night we saw a simpler episode breakdown – funeral and prison break.

Bill is super pissed to find Warlow on the brink of death and Sookie snaps saying he better blame Eric for this impediment on their recent deal, not her. She chews her arm to produce blood for Warlow (um, ouch) and pushes Bill out of faery land with her light. Eric is making his grand entrance at the facility by ripping off the penis of the doctor who infected Nora. Now that’s an image I won’t soon forget. Eric then goes to work breaking out the male vampires and finds at least one is infected. I feel like there should be more considering not many of them knew of the Tru Blood contamination but perhaps they just aren’t showing the symptoms yet? He then let’s out the female vampires and they all go on what the advertisements refer to as a “roaring rampage of revenge.”

Then we head to Terry’s funeral and get to see a few folks that have been missing for a while. For instance, Tara’s mom (now on HBO’s The Newsroom) and Maxine Fortenberry, who ensures us Hoyt is happy with his new, ugly girlfriend. And then up pops Alcide dressed like a respectable gentleman and we are reminded how awesome he was before they gave him a wolf pack full of jerks. Andy gets up to speak and we get our first flashback of the episode. Terry has just come home from his service and is camped out, in camouflage, at Fort Bellefleur. Then Sam speaks and we see his memory of that time, trying to convince Terry it would be ok for him to come work at Merlotte’s.

Back at the facility, Bill is on Eric’s trail and finds the castrated Doctor. And proceeds to crush his head like a bug when he admits to having hurt Jessica. Eric finds Jason and we realize he might be the only vamp in town whose blood Jason hasn’t had yet. But that’s soon rectified and both head out to view the carnage going down in the building. Meanwhile, survivor Sarah has been hiding in corpses to save herself but soon exits the building for her own mission – to open the ceiling of that round room from Bill’s vision.

And at the funeral, Lafayette is looking mighty find in a swank suit and amazing eyelashes. His Terry flashback involves his first day as a cook. Terry messes up some fries but admits to Lafayette he’d like to be good at his job so he helps him along. Back in the present, Sookie hears Arlene saying she’s not ready to speak yet and steps up for her. Sookie’s flashback is to the same night as Lafayette’s where Anna Paquin decided to put on an odd manner of speaking to let us know this is a younger, more innocent Sookie. Anyway, her, Arlee and another waitress get to chatting with Terry but Sookie soon realizes he only has eyes for Arlene. At the funeral she lets her know Terry loved her from the moment he laid eyes on her. And then I might have cried.

Back to the facility! Eric finds a few vampires torturing the therapist and tells them it’s his turn. For some reason, the therapist felt telling Eric he had sex with Pam would make him kill him immediately. Jason’s, “you did not just go there” was appropriately timed but Eric is intent on letting Pam take care of this particular business. Sarah is reciting scripture as she opens the round room to reveal….Bill feeding all of the vampires in the room to give them sunscreen. No one bursting into flames today! Well, actually. Steve can’t get in to grab a bite and Eric soon arrives, angry at him. There was a moment I thought he might get a reprieve but no, Eric forces him into the sun and he has the chance to utter the best line of the night as his dying words: “I love you Jason Stackhouse!”

Back to the funeral! Arlene speaks of Mikey’s birth and how Terry was calm as ever. I had thought the bit about their first meeting was the saddest. I was wrong. This was. Big John Dixon sings a song, Arlene tells him, “That was the shit,” and the 21-gun salute goes through. Arlene thinks Terry would have actually been OK with all the pomp and circumstance.

We get a quick look at a Tru Blood delivery in Honolulu getting stolen by hungry vamps. Uh oh, that’s the infected stuff. At the facility, Pam goes for therapist. If memory serves, we don’t actually see her kill him, just dancing with his corpse. Actually, all the vamps who fed on Bill are now high on faery blood and dancing like they don’t have a care in the world. Sarah is running to get away but Jason pulls a gun on her. I wanted her dead but I definitely didn’t want Jason to be the one to do it. Fortunately he let’s her go and the vamps get to destroying the tainted Tru Blood. Bill makes a full recovery thanks to Jessica’s new boy toy and we end the episode with Pam spotting Eric flying off to parts unknown.

I wish last night hadn’t been so back and forth between the two events. I would have preferred the funeral to take up the entire first half and let the escape take up the last. There wasn’t really any connection that would make the jumps back and forth feel natural and it hurt the emotional content at the funeral quite a bit. That said, I might have enjoyed this episode the most out of the whole season. Though as I said earlier, what happens now? Obviously the infected vampires are going to be an issue but is it one that can be dealt with in an episode or one that will bleed over into next season? The only other thing I see happening is Sookie giving herself to Warlow…which I don’t actually see happening.